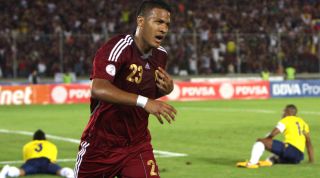 José Salomón Rondon, born in the Venezuelan capital of Caracas in 1989, began his footballing career at the tender age of seven with local side San Jose de Calasanz, where he remained until just before his 15th birthday. A season at amateur outfit Deportivo Gulima followed before Rondon was handed a professional deal at Aragua in 2006.

He made his first-team debut in October of that year, before scoring his first goal for the club six months later.

Rondon hit the back of the net 18 times in his 58 appearances for the Aurirrojos, a useful tally that earned him his big move to Europe with Las Palmas in the second tier of Spanish football.

Despite some initial struggles attributed at least in part to homesickness – Rondon didn't score a goal for the club until a year after his arrival – he enjoyed an excellent second season in Gran Canaria and was duly snapped up by Malaga, at the time competing in La Liga under the management of Manuel Pellegrini.

Two years later Rondon was off again having plundered 25 goals in 67 Spanish top-flight games, moving to the non-Spanish speaking world for the first time by signing for Rubin Kazan for €10 million.

Thirteen goals in his debut campaign helped Kurban Berdyev’s side to a sixth-placed finish and the quarter-finals of the Europa League, where they were narrowly defeated by eventual champions Chelsea despite a fully deserved 3-2 second-leg victory in Moscow. Rondon joined current club Zenit Saint Petersburg in January 2014, netting seven times in that season's remaining 10 games – including a hat-trick against old club Rubin – as the Sky Blues were pipped to the title by CSKA Moscow by a single point. Last term he plundered 13 league goals in 26 appearances as Zenit won the league for the first time in three years.

Rondon was one of the stars of the group stage at this year’s Copa America, putting in one of the outstanding individual displays of the tournament so far in Venezuela’s 1-0 win over Colombia. He led the line superbly against Jose Pekerman’s men, scoring the game’s only goal and outshining Radamel Falcao and Carlos Bacca in the process. Fans of the Premier League may be seeing more of Rondon in the near future, too: West Brom are currently thought to be close to wrapping up a deal for the burly frontman.

Standing at 6ft 2in with a well-built frame, Rondon is a strong and powerful centre-forward who is capable of dominating defenders. He is extremely mobile and excels at running the channels, leading his side’s pressing from the front. His sheer size means he is strong in the air and a fantastic outlet for a team under pressure: in the aforementioned game against Colombia, Rondon’s superb hold-up play allowed Venezuela to push up the pitch after long spells out of possession. He is also a clever mover up top, capable of pulling away from defenders or finding crucial yards of space inside the penalty box. His finishing has improved over time, with the striker’s one-in-two scoring rate at Zenit the best return of his career to date.

Consistency has been a long-standing issue for Rondon, who is capable of looking like a world-beater one week, clumsy and cumbersome the next. Fitness is another potential problem: Rondon appeared in 26 top-flight games last season but only completed 90 minutes in seven of them, which indicates he may have trouble adapting to the pace and intensity of the Premier League.

Rondon recently admitted that he owes a lot to current Manchester City boss Pellegrini, who was essential to his development as a player. The respect appears to be mutual, with the Chilean regularly praising Rondon’s commitment and attitude while in charge of Malaga. “He’s a young man who likes to work hard,” Pellegrini said in 2012. “From the outset he’s always shown willingness to evolve and learn day after day. He’s still at that stage where he has a long way to go, but it is a privilege to have him in the team.”

Rondon became the first black player to sign for Zenit after the club’s largest fans’ group called for the banning of all non-whites from the squad. Landscrona released a statement condemning the presence of black players in their team in late 2012, just a few months after Brazilian striker Hulk and Belgian midfielder Axel Witsel had moved to Saint Petersburg. The fans in question argued that black players were being “forced down Zenit’s throat”, insisting that “the lack of black players at Zenit is an important tradition which emphasises the identity of the club and nothing more... we are not racists.”

Despite the primordial views of those supporters, Zenit's director of sport Dietmar Beiersdorfer insisted that the club’s policy of signing players “without any limitation regarding origin, religion or skin colour” would continue, with the addition of Rondon from Rubin Kazan in January 2014 evidence of such an approach.

Together with his fine domestic campaign at Zenit, Rondon’s performances for his country at the Copa America have put him on the radar of some of Europe’s big names. West Brom – in need of some reinforcements in the striking department with Saido Berahino's future unclear – will make him their club-record signing at £15 million. Three years after Arsenal, Chelsea and Tottenham reportedly tried to bring him to these shores, Rondon could finally be set for a Premier League switch.

Get the inside track on football's hottest prospects on FFT.com