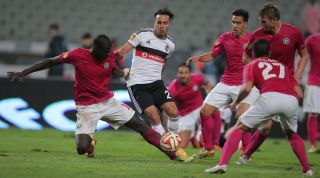 Most people will be expecting nothing less than a good old-fashioned rout on Thursday when Tottenham welcome Asteras Tripolis to White Hart Lane in their Group C Europa League encounter. The differences between the two sides couldn’t be greater when taking into account financial might, quality of personnel and history. However, those ready to see Spurs put the Greek outsiders to the sword may be in for disappointment.

For the last decade, this club from the Peloponnesian capital of Tripoli has stunningly punched above their weight. Domestic giants have been stared at eye-to-eye and beaten, and now there is the belief they can do the same to opponents on the continental stage.

After a series of promotions, Asteras only made their debut in the Greek Super League in 2007. Everything about the club screams modest, from their Theodoros Kolokotronis ground (7,616 capacity) to the team’s players being found regularly mingling with locals in the city of just over 30,000. Their lower profile and ability to play the underdog so well has endeared them to Greek football fans, so many of whom point to Asteras as their second-favourite side.

The club are in the midst of the best period in their history. This season was the third time they have qualified for the Europa League. Their first two appearances in the competition ended in disappointment with defeat in the qualifying rounds, but this season they finally reached the group stage.

After overcoming Finnish side Rovaniemi in the first qualifying round, they were expected to lose easily to Mainz. However, a fantastic home display in the second leg overturned a first-leg deficit and Staikos Vergetis’ side went through 3-2 on aggregate. The plucky Greeks then went on to cause another upset in the play-offs by disposing of favourites Maccabi Tel Aviv on away goals.

Though only hardcore followers of European football may recognise them, Asteras are not your typical Euro no-hopers. The victories over Mainz and Maccabi Tel Aviv suggest they are a serious side that could compete with more established continental clubs.

An away draw to Besiktas and victory over Partizan Belgrade last time out has given the Greeks a fast start in Group C, and done wonders for the club’s ever-growing confidence.

At first glance the squad seems like a ragtag group of journeymen foreigners and average domestic talents. A closer look, however, reveals a battle-hardened bunch with experience in leagues across Europe including Spain, Italy, and France, not to mention some international caps thrown in for good measure. Vergetis has put together a compact unit who truly believe in themselves to do something special.

In three Europa League campaigns, including this season’s extended run, Asteras have never lost a home match. They have been unable to offer much on their travels, however. In seven away trips in European competition they have failed to register a victory.

While there is balance in the team and a real dogged determination within the ranks, there is also a distinct lack of goalscoring power. The absence of a prolific finisher is a major problem for a team that doesn’t score too many goals in Europe or domestically.

It will be no surprise to see Asteras line up at White Hart Lane in their usual 4-2-3-1 formation. Argentine striker Facundo Parra leads the line ably supported by his countrymen Pablo Mazza and Martin Rolle behind him, along with Greek under-21 international Giannis Gianniotas, on loan from Fortuna Dusseldorf.

In Europe, Asteras adopt a defensive style ceding possession and getting players behind the ball. This is a team that knows how to defend, although their creativity may surprise. Well-versed in the art of the counter-attack, Vergetis’s side has enough quality offensively that they can be downright deadly on the break.

The Greek side don’t possess a true superstar, but frontman Parra has to be the considered the main man. The Argentine is charged with grabbing the goals for the team and he is off to a quick start this season.

The former Independiente striker has forced a habit of scoring goals on big occasions since his move to Asteras earlier this summer. His volley earned a point in Turkey against Besiktas, and he also netted in the win over Partizan.

The 29-year-old has never been a prolific forward, nor has he been able to make the grade in European football in previous spells with Atalanta and Greek outfit Larissa. Yet he has seemingly found a home in Tripoli and Vergetis’s faith in him is paying off.

Quite simply, Asteras Tripolis are Greek football’s version of Hoffenheim, only a whole lot more popular in their own nation. Just as the German club spectacularly rose through the amateur ranks to make it to the Bundesliga, Asteras have done so in Greece.

Founded in 1931, the club has spent most of its history bouncing around the lower divisions being a regionally strong amateur side. At the turn of the millennium, however, the club put together a team that earned four successive promotions. They made their maiden Greek Super League appearance in 2007 and marked it in style by claiming big wins over traditional powers Olympiakos, Panathinaikos, AEK and PAOK.

Manager Vergetis is undoubtedly the club’s most legendary figure. The current boss has seen it all through a variety of different positions with the club.

His story is one of a local boy finding success with the club he loves. Though injury derailed his shot at a playing career, the 38-year-old pursued a coaching education. He was hired by Asteras as a youth team fitness coach, but his abilities were recognised early and he rose to prominence within the club.

A studious Vergetis took it upon himself to learn several different languages and became the club’s official translator for a variety of different managers. In all, Vergetis has survived 11 managerial changes since 2006, and risen from fitness coach to first-team assistant. When Sakis Tsiolis was fired last October, the club decided to appoint from within and gave him the reins.

The move has paid off, with Asteras thriving and Vergetis quickly becoming one of the country’s top young bosses. His meticulous planning, ability to analyse the opposition and translator past have led to him being labelled as Greece’s Jose Mourinho.