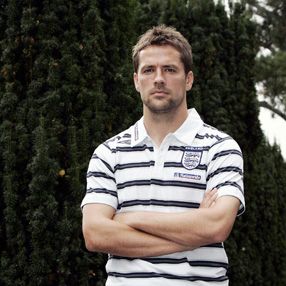 Goalkeeper
Peter Schmeichel
Of all the keepers I have played against, Peter was easily the best. Petr Cech is one of the best now, but Schmeichel was an all-round great. You can’t be a great by just being a good shot stopper, you have to have it all – and he did.

Right-back
Cafu
I played against Brazil a couple of times and he and Roberto Carlos were just awesome. They changed the way full-backs played. People thought a full-back should just defend, but in today’s game it’s important for full-backs to be good on the ball as well, and Cafu led the way in this respect.

Centre-back
Marcel Desailly
When he came to Chelsea, he was a ‘proper’ player. With some defenders you think “he’s not strong”, “he’s not so quick” or whatever and try to play against that weakness. But Desailly was virtually impossible to play against. He was strong, quick, and good on the ball. People question whether he just played well in the big games, but I tried kicking him once and hurt my foot – which shows what sort of game I had against him!

Centre-back
Paolo Maldini
Just look at his trophy cabinet! To play for a team like that for as long as he did at the highest level says it all. Great left foot, and while he has maybe lost a yard as time has gone on, defenders like that never get done for pace because they’re so intelligent. People tell me Bobby Moore was like that, John Terry is like that – and so was Sami Hyypia at Liverpool. Maldini knows his body and is very clever.

Left-back
Roberto Carlos
Like Cafu, he made people rethink the role of a full-back in a team. Great on the ball, made good runs – but also great dead-ball delivery. Fantastic.

Right-midfield
Cristiano Ronaldo
He’s not done it for as long as the rest of my team, but you’re a fool if you don’t think he will continue on the up. Has great skill, speed and strength and scores goals and creates goals – what more can you say? A great player who will get even better.

Centre-midfield
Steven Gerrard
The ultimate modern-day player. Has a big engine and strength plus great size and long legs – he’s one of the best at intercepting passes and reading the game. And when he has the ball, he is equally fantastic. One of the best passers,
a great shot, quick and can beat players. You could play him in any position and he’d get in most teams.

Centre-midfield
Roy Keane
If I was a manager I’d play 4-4-2 with two tough players in the middle who people hated playing against and two flair players on either side. Who better than Gerrard and Roy Keane? Both are good passers but in different ways. Keane kept it simple, yet had a great engine and could run box-to-box all day.

Left-midfield
John Barnes
I was fortunate enough to play with him a couple of times before he retired. A great player. He didn’t get the credit for England despite winning loads of caps, but I watch videos of Liverpool playing and 99 percent of goals come from Barnes beating five players and passing to Ian Rush to tap in! It was mind boggling how skilful he was. I never saw him give the ball away and he used to caress it around the pitch. A joy to watch.

Forward
Thierry Henry
He took the Premiership to a new level. We’ve had some good imports – Gianfranco Zola and Dennis Bergkamp among them – but he’s been the best. He beats players, he creates goals and he scores them. I’d pay to watch him.

Forward
Alan Sheare�r
Scored goals at every level and even when he was out injured for months on end, he always seemed to be top scorer! And I like him because you get a lot of flair players, but nobody was as mentally tough as Alan, who got the most out of his body for such a long time. Probably the greatest Premiership player ever.

Manager
Sir Alex Ferguson
The most successful in the present era and continues to win things even as football evolves. He has also produced some of the great players.

Neville Southall
I was an Everton fan in the 1980s, and I thought he was the best goalkeeper in the world.

Jamie Carragher
No squad is complete without him. And he’d kill me if he wasn’t in this!

Zinedine Zidane
I was lucky enough to play with him. A magician.

Ronaldo
But for knee injuries, he would be the best player in the world right now.

Interview: Steve Merrett. From the September 2007 issue of FourFourTwo.