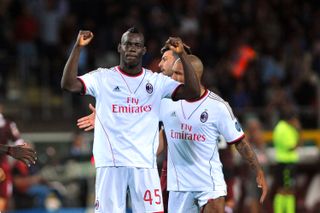 After two low-key rounds of the season, Serie A was back with its usual mix of scheming, screaming and shouting after the international break.

Aside from AC Milan‚Äôs opening-day slip-up at Hellas Verona, it‚Äôs been a surprisingly quiet start to Italy‚Äôs top flight.

This weekend, however, there were two derbies to contend with. Top billing was the Derby d‚ÄôItalia between fractious rivals Inter and Juventus, while the Derby della Lanterna (derby of the lantern) brought together Genoa and Sampdoria ‚Äì and accusations of Rambo-like spy games.

Then there was the headline-grabbing return of Kak√Ý to AC Milan, and whether the angelic Brazilian would blunt the devilment in Mario Balotelli‚Äôs game.

But it was the Inter-Juve showpiece that attracted a bumper 75,000 crowd to the San Siro. What they saw was a war of attrition, though, as both sides' lack of attacking focal point told in a disappointing 1-1 draw.¬Ý

Inter coach Walter Mazzarri went for a lone striker in Rodrigo Palacio, while his opposite number Antonio Conte was forced to watch the less-than-fit Mirko Vucinic meander to no great effect. There were moments of creativity from Ricky Alvarez for the home side, and Carlos Tevez for the visitors, but ultimately there were more head-on collisions than mazy twists and turns. ¬Ý

The match tipped in the home side‚Äôs favour on 73 minutes when Alvarez caught Giorgio Chiellini in possession. The Argentine played in substitute Mauro Icardi, who fired home his fourth goal in just three outings against the Bianconeri (after his three for Sampdoria last season).
¬Ý

Though both defences had been on top up until then, it was another defensive lapse two minutes later that led to a Juve equaliser.¬Ý

Kwadwo Asamoah seemed to have been shepherded out of play by Inter full-back Jonathan, but the Juve man powered forward to find Arturo Vidal, whose quick pivot and low shot into the corner ensured Inter‚Äôs joy was short-lived.¬Ý

The Old Lady could have snatched all three points at the death had Mauricio Isla ‚Äì a summer Inter target ‚Äìheld his nerve and not sliced his shot wide at the back post.

Neither side suffered any collateral damage, but it was Inter boss Mazzarri who came away feeling more satisfied with the outcome. That his side were able to nullify the champions‚Äô attacking threat for a good three-quarters of the game was positive for the 51-year-old.

Mazzarri's preference for artisans over artists is shown in this workmanlike Inter side. That‚Äôs not to say the Nerazzurri won‚Äôt produce results, but on this showing it was Juve‚Äôs more skilled craftsmen who ensured a share of the spoils.

Both sides could have done with Milan‚Äôs massive slice of good fortune in Turin, where it looked as though Massimiliano Allegri‚Äôs side were facing a second consecutive away defeat as they trailed Torino 2-0 with three minutes remaining.

But Sulley Muntari scuffed home from the edge of the area, and when Andrea Poli was upended in the area deep into stoppage time, Balotelli converted the penalty for his 21st straight spot-kick success.

Up to then there was very little of the Super in Mario‚Äôs game ‚Äì although he was hardly outshone by Kak√Ý‚Äôs return. The second coming of Ricky fell flat from the off as the Brazilian struggled with a sprightly Toro midfield, and it was no surprise when he was hauled off with 20 minutes to go.
¬Ý

Home coach Giampiero Ventura was fuming after Milan‚Äôs equaliser originated from a throw-in, when his player Marcelo Larrondo had just been stretchered off and no substitution had been made. Ventura demanded a meeting be held with the referees‚Äô association for discussions about when officials can sanction changes.¬Ý

His calls for a ‚Äúsit-down‚Äù were echoed by Fiorentina boss Vincenzo Montella, who took post-match raging to a new level after striker Giuseppe Rossi was denied a penalty in added time against Cagliari.

The Viola had been leading 1-0 at home to Cagliari thanks to Borja Valero‚Äôs close-range header, only to concede an 89th-minute equaliser from Mauricio Pinilla‚Äôs own nodded effort. As the clock hit 92 minutes Rossi tangled with defender Nicola Murru, only to be denied a spot-kick after the referee allowed play to continue.

David Pizarro was shown a straight red for blasting the ‚Äúafraid‚Äù official for his lack of decision. Montella didn‚Äôt hold back in his protests either as he marched alongside the referee all the way from bench to tunnel ‚Äì¬Ýbehind the goal at the Artemio Franchi stadium.

Fiorentina, although considered genuine top-three contenders, still don‚Äôt feel like they‚Äôre treated as one. Last season a number of contentious incidents where shrugged off with a sigh, but Montella has promised to fight his corner this year.

His outburst could well lead to a suspension, and with Mario Gomez facing an extended period on the sidelines with knee ligament damage, the Florentines must not fall into the trap of feeling sorry for themselves.¬Ý
¬Ý

If it means treating each game as a war then they need look no further than Genoa. Their tussle with Sampdoria is known as the most intense on-pitch derby in Italy ‚Äì but it was the off-pitch claims of espionage that gave this Liguria encounter an extra edge.

Luca De Pr√Ý, a Genoa youth coach, was caught in the woods overlooking Sampdoria‚Äôs training ground in full camouflage uniform, on what the club later claimed was a ‚Äúrogue‚Äù spying mission which would never have been sanctioned by them.

Genoa immediately suspended De Pr√Ý, whose grandfather Giovanni is considered the club‚Äôs greatest-ever goalkeeper, but quickly claimed Samp infiltrators had been spotted at the window of a building overlooking the Rossoblu training ground. They later turned out to be pranksters with no affinity to anyone. ¬Ý¬Ý

In the end there was little need for any inside knowledge as Genoa swept Sampdoria away with little more than a few direct balls played into the danger zone. The 3-0 scoreline, where derby debutants Luca Antonini, Emanuele Calai√≤ and Francesco Lodi all scored, did not at all flatter the Grifone. Despite having conceded seven in their opening two matches, they were never troubled by a shambolic Samp.

The weekend started with a roar at the San Siro and ended with a whimper at the Marassi, but in between there was plenty to shout about.