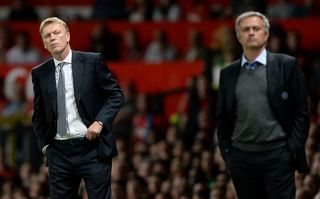 The pre-match talk was all about Wayne Rooney, perhaps surprisingly selected by David Moyes despite the ongoing rumours of a move to Stamford Bridge.

Was Moyes making the right call? Would the Chelsea target really play his heart out for Manchester United when Jose Mourinho had publicly declared that he would be back in for the England man after the match? The answer quickly became obvious... Here's what we learned by keeping an eye on Stats Zone, our award-winning app which you can now use online.

Early in the first half, Manchester United definitely favoured their right flank, where Rooney was doubling up with Antonio Valencia. By contrast, Chelsea were tending to attack down their left flank, where Eden Hazard tended to be - despite Chelsea's fluid formation, in which Jose Mourinho decided not to use a regular front man, instead playing Andre Schurrle as the furthest forward of a midfield six.

Despite the congestion in midfield, Tom Cleverley came to the fore, outpassing even his central midfield partner Michael Carrick. Is the torch being passed on?

For all their wide play, neither team regularly threatened from crosses: by half time, they'd found their man with just 3 of 17 attempts - although Patrice Evra did create a chance for Robin van Persie.

In the first 10 minutes of the second half the home side cranked up the pressure, with Chelsea hardly entering United's third.

Indeed, by the hour, the champions had completed almost twice as many attacking-third passes as their visitors.

On the hour, Jose Mourinho tried Plan B by bringing on Fernando Torres for Kevin de Bruyne. The switch stopped the hosts being on the front foot quite as much, and Chelsea made twice as much headway in the next 10 minutes as they had in the half's first 15.

But as each side's substitutions started to kill the game rather than thrill the public, the match dwindled out into a 0-0 draw.

Manchester United ended up firing in 12 shots to Chelsea's 8, but the visitors got more on target by 4 to 3. All of the home side's accurate efforts came from Rooney.

United were the busier passes (and completed 84% to Chelsea's 82%) and had 54.7% possession, but neither side had its penalty area threatened too often.

Cleverley got top marks for passing, and he also completed 19 of 22 passes in Chelsea's third - the same number of completions as Hazard, although the Chelsea man tried one more. Cleverley and Carrick, the game's top two passers, completed 130 of 146 attempts; their opposite numbers Frank Lampard and Ramires completed 70 of 97.

For all the careful probing, the game was somewhat hesitant, with no player really grabbing it by the horns. Nobody created more than one chance until Nemanja Vidic added another knockdown in time added on, and only Hazard and Antonio Valencia completed more than one dribble.

If anyone did manage to impose himself on the game it was Rooney. Chelsea's transfer target was the centre of attention throughout the match - during the initial exchanges, both sets of fans were singing his name - and rewarded the observers by proving his dedication to the United cause, racking up the most shots, the most shots on target, the most attempted passes in the opponents' third… and the most fouls committed.

And finally, as quite a few people tweeted @StatsZone to ask: there was no apparent on-field rift between Rooney and Robin van Persie. The Englishman passed to the Dutchman 5 times - he only passed more often to three players - while Van Persie passed to Rooney 7 times, 5 more than he passed to anyone else. If Rooney has a problem at Old Trafford, he certainly didn't show it.

For more FourFourTwo analysis of the weekend's games, click the red Stats Zone tag below.