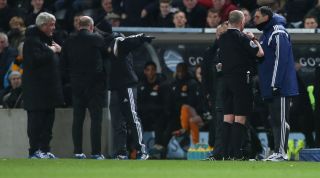 Invariably furious Sunderland manager Poyet confronted red-faced Hull tactician Bruce after being sent to the stands during their teams' 1-1 draw on Tuesday.

Many feared the scuffle might have descended into an all-out fracas had it not been for the timely intervention of 40 members of Sunderland's coaching staff and fourth official Darren Bond, who separated the pair with a series of stern, authoritative rabbit punches.

"Gus told me I looked like the Stay Puft Marshmallow Man," said Bruce, "So I told him to cross *these* streams while grabbing my crotch.

"I don't know if he got the reference because then he tried to bite my face, which I gather is only mildly offensive in Uruguay."

Poyet then threatened Bruce that his son Diego, the lycanthropish West Ham midfielder, could easily have Hull City afterthought Alex Bruce, son of Steve, in a fight.

"My Diego's bigger than Alex Bruce," Poyet bragged, "and he's stronger and quicker and richer and he could knock him down without even trying."

But Bruce disagreed: "My Alex is taller than Gus's boy," he claimed, "And he could definitely beat him in a wrestle, or a race, or any game of skill or chance or a combination of the two."

FourFourTwo understands that both Diego Poyet and Alex Bruce are unwilling to fight for the honour of their sweaty fathers. A friend of the Bruce family said: "This happens whenever someone upsets Steve, or spills his port, or compares him to a heavy-set fictional character. Alex is a lover, not a fighter, as anyone who's seen him play will testify."

It is rumoured that if Alex Bruce refuses to fight the younger Poyet, his father will disinherit him in favour of Jake Livermore, who Bruce senior often refers to as "the son I never had".