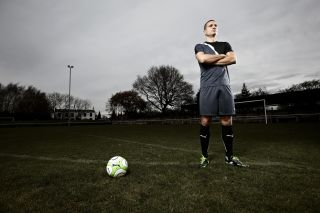 You have played with some great defenders, who are the best defensive partners you have played with?
Rio [Ferdinand]. We have played for seven years together and we have had so much success. We understood each other from the first day. Sometimes you understand a player and see the game in the same way; if you have a player who likes to play a different way, sometimes it is difficult to play well together.

Who were the defenders you looked up to as a kid?
I have my idols but they are never defenders! They are always forwards or midfielders; they are more attractive than defenders. This was the same when I was young, I used to try and play as a winger and then full back and then ended up as a defender. But forwards are always my idols.

So which attackers did you like when you were younger?
There were many. Faustino Asprilla was good when he played for Parma; I used to love Parma. Zinedine Zidane, the old Ronaldo. There was never one, it was always different players.

After retiring from the national team, are you looking forward to watching Serbia's World Cup qualifier vs Croatia [in March 2013] or does a part of you still wish you were playing?
We have a young team now; we didn’t start [the qualifying campaign] well, but we can get stronger from here - we have a great future. Obviously, I retired and I am now more the fan or the supporter. It will be a great game to watch and to play but they have young players who can show their abilities and bring happiness to the country.
You never know when the time is to stop playing for the national team. You make decisions - some good, some bad. But sometimes you have to leave a space for the young players to play; I have played for the national team for 10 years. I have now given them a good opportunity to play and show their abilities. We have a few very young players; [Matija] Nastasic playing for Manchester City is a good player coming through.

Who is the best young player coming through at Manchester United?
There is a lot of great potential [at Manchester United]. It is hard to say, I want them to prove themselves, I don’t want to give compliments without them earning them. I think the media now makes it harder and doesn’t help young players. Let them work and train hard and show their abilities, then give them compliments.

Alex Ferguson has obviously achieved a lot at United, who if anybody could replace him at United?
It is tough to say, the way the club is built is on stability; some of [the players] have been with Ferguson for ten years. We still want to keep stability. It will be a tough place to be and it will be a big challenge for the club and for the [new] manager to sit in that chair, but he will have support from the club and the fans and [we will] give him all he needs to do well. Who it will be I do not know - the manager is still doing well, so we don’t need to think about that now.

Have you ever thought of moving into management?
I would like to be a coach or a manager one day, but you never know, you change decisions. I have had some coaching lessons and I am interested in that, but I am still a footballer.

What if Gary Neville comes back as manager and starts bossing you around like he does on Sky Sports?
Why not? This is the position of the manager; this is what they have to do. Gary is good, he is doing well on Sky; he gives good criticisms. He is always doing that; he always has opinions and says what he thinks, and that is good. Good for Sky, good for TV and good for people to learn from him.