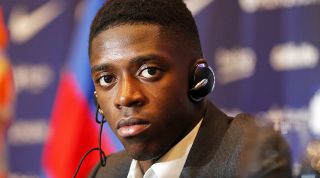 Everyone has their favourite Netflix series, whether it's House of Cards, Stranger Things or Orange Is The New Black.

Fortunately for new Barcelona signing Dembele, his preferred show Narcos has been helping him pick up some basic Spanish words to coincide nicely with his move to Spain.

He told AS: “There is still very little - hello - and something else. With the language a series that I love, Narcos, helps me.”

The 20-year-old enjoyed a fine debut season at Borussia Dortmund last season, thrilling crowds with his fearless approach to taking on defenders.

He might have to pluck up courage in a different way soon – there's surely a Barcelona initiation song on its way.

“I sing the [Narcos] song and everything but I keep it for me," Dembele said. "Since I've been in the French national team, many players in the [Spanish] league sing songs in Spanish.”

He'll probably want to avoid the phrases about murder and shifting copious amounts of cocaine, mind.