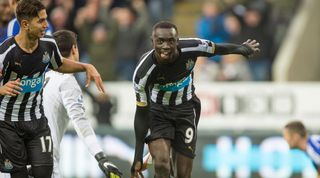 Ten-man Newcastle put in an impressive performance to beat Chelsea 2-1; Jose Mourinho's winless record at St James' Park in the Premier League extended to five games after two goals from super-sub Papiss Cisse won the day for the Magpies.

Chelsea showed attacking impetus early on and for much of the game, racking up 26 efforts on goal. But Newcastle were more ruthless, and Cisse knocked in two second half goals to win it for Alan Pardew's men, who had Steven Taylor sent off and suffered a late scare when Didier Drogba turned in a Cesc Fabregas free-kick to offer the Blues a lifeline.