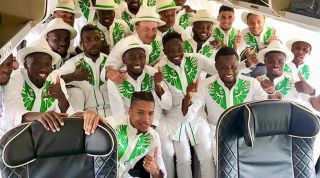 The Nigeria home kit, priced at £64.95, was pre-ordered three million times ahead of its official launch – and when the stock finally arrived to Nike Town in London's Oxford Street, it sold out in minutes.

But the squad took their fashionwear up another notch as they boarded a flight to Russia on Monday, ahead of Saturday's World Cup Group G opener against Croatia.

All of the players rocked up to the airport in long-sleeved patterned shirts (featuring wings), fitted trousers, plus matching hats and shoes as they set off from Austria.

Another team who raised their game in the fashion stakes was Panama, with the entire squad donning stylish headgear when they flew out last Friday.

China defender Wang Shenchao gets a one-year ban... after sneaking necklace onto pitch