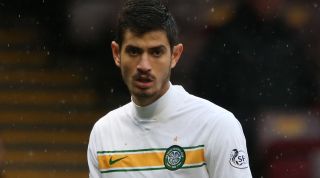 After a difficult start to his Celtic career, Nir Bitton has bounced back and is now arguably the club’s most prized asset.

The Israeli is a constant in Ronny Deila’s team and has fast become a fans’ favourite in Glasgow, with his elegant performances in the middle of the park very much in the mold of Sergio Busquets.

Signed from port city outfit FC Ashdod in his homeland for a £700,000 fee back in August 2013, the midfielder is a good fit for the club’s ‘sign small, sell big’ model.

A troublesome opening term at Parkhead put that in jeopardy, however, with Bitton’s first notable contribution in a Celtic shirt a reckless lunge in the Champions League against Ajax which saw him sent off 11 minutes after coming on as a substitute with his side defending a 2-1 lead.

Injuries and an inability to find a settled role in the team prevented the youngster from getting a run of games under his belt, leading to rumours that he might push for a move away from the Scottish top flight.

That rash immaturity has made way for composure and assurance in the 10 months since, with Bitton becoming a key cog in Deila’s pacy and energetic outfit. The 23-year-old’s rise will have attracted the attention of scouts south of the border, with Bitton likely to follow in the footsteps of Fraser Forster, Gary Hooper and Virgil van Dijk in swapping Celtic for the Premier League.

The stereotypical midfielder in the Scottish Premiership is aggressive, tough and eager to engage in a physical battle. Supporters demand that players in the engine room come off the pitch with their jersey drenched in sweat, yet Bitton is the opposite. At 6ft 5in, he is certainly more than capable of holding his own in the centre of the pitch, but it is his ability on the ball that puts him head and shoulders above anyone in the division. It is rare to see an individual exude such class and composure on sub-standard pitches.

His rare calmness in possession saw Bitton start 31 of 38 league matches last season, as well as all of the Bhoys’ Scottish Cup matches on their run to the semi-finals.

The consistency he is displaying has also won him admirers on the international scene, with Israel coach Eli Guttman making him a regular fixture in the national team as they seek qualification for Euro 2016.

Bitton’s main quality is his passing. Operating as the deepest-lying midfielder in Deila’s 4-2-3-1 system, the onus is on him to start the vast majority of Celtic’s attacks at the high tempo the manager desires. Capable of playing intricate short passes as well as searching diagonals, Bitton helps to build the play for the champions. There is a serenity about Bitton that very few players in Scotland’s top tier possess. He neither rushes nor dwells on the ball for too long, and looks for a forward pass more often than not.

His game is not all about pretty passing, though. Sitting deepest in the midfield requires discipline, tactical intelligence and defensive nous; characteristics which Bitton possesses in abundance. His expert positioning in front of the back four makes him appear like a player with a decade of experience, with Bitton helping to break up the play as well as create it, either with standing tackles or smart anticipation.

Despite generally playing deep, Bitton could certainly add more goals to his game: he scored just twice in the last league campaign, and the Celtic coaching staff have identified finding the back of the net as an area of improvement. Two goals from corners so far this term is a step in the right direction. Although Bitton netted a fine long-range goal against Kilmarnock earlier in August, his shooting from outside the box still requires more accuracy. Bitton has the stamina to develop into more of a box-to-box player and, with some fine-tuning, could become more of a handful further up the pitch.

After Celtic beat Azerbaijani side Qarabag in the second round of Champions League qualification, his former boss at Ashdod, John Gregory, said: “He has so many attributes when you are watching him play. There will be a lot of Premier League clubs sitting up and looking at this boy, keen to keep an eye on him.

“He looks very elegant in everything he does but there’s a lot going on underneath. Give him the ball and he’ll look after it.”

Bitton almost joined Roberto Mancini’s Manchester City when he was 20 after impressing on a week-long trial with the club. He played in three friendly matches but a permanent deal did not materialise because of work permit issues.

After impressing on a regular basis domestically, the challenge for Bitton now is to make an impact in the Europa League. Celtic’s run to the knockout stage of last year’s competition offered a glimpse of how Bitton would cope when up against a higher calibre of player. The midfielder was in the thick of things in both legs against Inter, demonstrating his technical ability at home and defensive solidity away as Celtic crashed out in the Round of 32. That experience should help Bitton fare even better this time around, with Celtic looking to the Israeli to take each game by the scruff of the neck.

Bitton will also have half an eye on Euro 2016, with Eli Guttman’s charges seeking to qualify for their first major tournament in 45 years. Israel currenly sit third in their qualifying group; it would be quite something if Bitton was part of the team that ended such a long wait. Bitton’s desired ticket to the bright lights of the Premier League may hinge on his performances in the aforementioned European competitions. If the Israeli does make the move, Celtic will be making a considerable profit on their £700,000 investment.