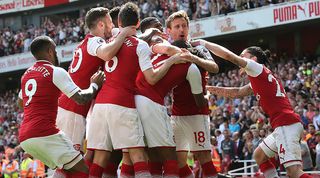 *Note: for a counterpoint to this optimism, read Tim Stillman on why rebuilding Arsenal is a more difficult, long-term project

For years, it has been suggested that succeeding Arsene Wenger would prove to be ‘the impossible job’; a poisoned chalice similar to that which Alex Ferguson’s immediate successors faced at Manchester United.

On the contrary. For the right man, it’s an opportunity to be seized with relish. Arsenal fans yearn for change and a hero’s welcome awaits the next man to enter the dugout. The rumours are no more – Wenger will leave this summer, creating a vacancy that prospective candidates should be queueing up for.

For starters, it’s a position in the Premier League. That means two things: money and profile. There’s a reason the likes of Rafa Benitez – a manager who has won two Liga titles, the Champions League, Europa League and Club World Cup – is prepared to scrap it out in the table’s lower reaches. England is where the game’s best managers come to test themselves – and be financially rewarded for their endeavours – and Arsenal are one of the biggest clubs in the country.

That’s reflected in their spending power. With Chelsea seemingly determined to rein in their expenditure, only the two Manchester clubs have a budget that vastly outstrips Arsenal’s. The influx of television money and new corporate deals, including the extension of their sponsorship with Emirates, mean Arsenal have finally arrived at the prosperity first promised by their stadium move.

The proof is in their purchases: the Gunners have broken their transfer record twice in the last eight months, spending north of £100m on attacking duo Alexandre Lacazette (£46.5m) and Pierre-Emerick Aubameyang (£56m). The unfortunate thing is that Arsenal have recovered their financial footing just as Wenger’s once-revered judgement appeared to be waning. However, a new man will be granted significant resources with which to set about making this team his own.

The new manager will also have fantastic support when it comes to recruitment. Arsenal have acted with uncharacteristic strategic intelligence to sign up Sven Mislintat and Raul Sanllehi to help oversee football operations. Mislintat is the talent-spotter who made his name helping Borussia Dortmund battle the behemonth that is Bayern Munich, while former Barcelona executive Sanllehi is one of football’s most reputed deal-makers.

The Spaniard is, after all, one of the men credited with getting the extraordinarily complicated deal transferring Neymar from Santos to Barça over the line back in 2013. When it comes to transfer business, Arsenal have the personnel required to help them get what they want this summer.

Not that there isn’t a good base to work with already. For all Arsenal fans’ frustrations this season, a new manager would still inherit a talented core of players. It remains to be seen how Aubameyang and Lacazette might dovetail – they only started a game together for the first time a week ago – but it’s been a while since the Gunners had two such talented forwards in the same squad. Beyond that pair of pricey poachers, there are also the likes of Mesut Ozil, Aaron Ramsey and Hector Bellerin to consider. This is the sort of elite talent that coaches dream of working with.

Arsenal are also blessed with a superb academy, and young talents like Reiss Nelson, Ainsley Maitland-Niles and Eddie Nketiah appear to be on the verge of breaking through into the senior squad for good. While other clubs scrabble around for players to help them meet the homegrown quota, Arsenal are trying to find room for an exciting young generation.

Some have floated the concern that Arsenal have an ageing squad, and there is some truth to that statement. Per Mertesacker is on the verge of retirement, and sadly Santi Cazorla can’t be too far behind. Petr Cech, Laurent Koscielny and Nacho Monreal are all comfortably into their 30s. The defensive side of the squad is particularly in need of renovation.

However, that’s no bad thing. It’s not as if Arsenal face the nightmare situation of replacing a water-tight backline — they actively need a measure of churn in that part of the pitch. Wenger arguably faced a far tougher task when having to replace an iconic back four.

Any new manager is going to be given free reign to revamp Arsenal’s weakest area, and the age profile of their defenders means that they won’t be tied to an another manager’s players in the long term. This is, in some respects, the ideal time for a partial rebuild.

9 managers who could legitimately replace Arsene Wenger at Arsenal

Timing is everything in such a situation, and it’s difficult to escape the assertion that Arsenal are primed for change. For a long time, it was feared that Wenger’s successor would be plunged into a period of grinding mediocrity — a ‘David Moyes era’, if you will. However, Wenger’s own decline has effectively assuaged that problem; Arsenal are already experiencing the difficult transition. Chief executive Ivan Gazidis insisted a year ago that Wenger could prove a “catalyst for change” — but it’s now the new man who will assume that role.

The fans will welcome a new figurehead with open arms. That’s the final, and arguably most compelling factor for any potential manager in the frame – the sheer support they’re likely to receive from a fan base desperate for a fresh face. Arsenal are making the change this summer, meaning the apathy of this season will quickly evaporate.

The club has the capacity for great growth, and the same fans who’ve stayed away from the Emirates Stadium this season will flock to see what the new man can do. Make no mistake, this is a very attractive job right now — and Arsenal can now secure a top-class manager for next season and beyond.