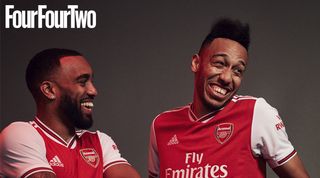 Arsenal striker Pierre-Emerick Aubameyang says he knew he would love lining up in the same Gunners side as Alexandre Lacazette, in an exclusive interview with FourFourTwo.

Lacazette arrived from Lyon for £45m in 2017, and sceptics questioned how the Gunners would line up with two recognised strikers in Arsene Wenger's final season in charge.

Aubameyang, however, was not concerned.

"It was love at first sight!" the Gabonese striker told FourFourTwo in our August 2019 issue, out now. "The day I arrived, he came straight up to me and said, 'I hope we'll play together.' I said, 'I hope so too.'"

The duo initially struggled to complement each other at the Emirates Stadium, with long-serving Gunners boss Wenger pushing one out to the wing or dropping them both completely.

But former Dortmund man Aubameyang always had faith, claiming he "knew we could form a really good partnership and help each other score goals".

The Gunners' strike duo featured together a lot more under Unai Emery, who often played a diamond formation to accomodate his star frontmen.

Lacazette had a mixed first season with Arsenal, but dismissed the idea that Aubameyang's arrival from the Bundesliga would mean him losing his place in the side.

"He was the kind of player I joined Arsenal to play with," the Frenchman told FourFourTwo.

"At first, people were saying, 'Hey, he's coming to take your place,' but I always knew we could play together."

Read the full interview with Matteo Guendouzi in the August 2019 issue of FourFourTwo magazine, out now! It’s part of our 23 reasons why it’s still good to be a Gooner. Plus, we hail the stylistic genius of Andrea Pirlo, head to Monterrey for a mad Maxican derby, reflect on Jose at Chelsea 15 years on, recall a particularly damaging Panorama documentary and much, much more...