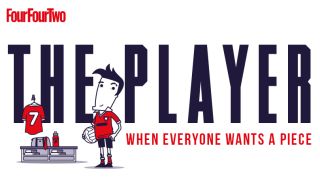 I’d just finished my warm-up and returned to the dressing room when a senior steward came to tell me that a close friend was in reception. The steward was apologetic, but the person in reception had stressed that he was very close to me and that he’d come to pick up his tickets – which couldn’t be found.

Wearing full kit and flip-flops, I walked through the corridors to check it out, baffled because I’d sorted my six complimentary tickets for family and friends days earlier.

Waiting for me was someone I’d been to school with. I’d not seen him for 10 years – and we weren’t even mates. “Hello, mate!” he greeted me. “Any chance of a couple of tickets for today?”

The cheeky bastard. I felt a mixture of anger at his cheek and admiration that he’d blagged it so much a steward came to get me from the dressing room. I faced a dilemma: sort him tickets and risk him trying it again, or just say no. I got him a few tickets on the understanding that this was the first and last favour because “I’m going to get in shit with the manager for this” – which would’ve been the truth, if I hadn’t been the manager’s blue-eyed boy at that time. I’ve not seen or heard from the former school ‘mate’ since.

You attract all kinds when you’re a footballer, especially in the Premier League. One bloke I half-knew launched an organic food business; he wanted to me to fix it for him to give a presentation to the whole first team and thought it would be absolutely no problem for me to arrange it. I politely turned him down. The dietician would have had an issue with it, for a start.

I’ve had more offers of financial advice than yellow cards in my career: people you know, or are even just on nodding terms with, who see you as their meal ticket. One had a grand plan that involved him training as a financial advisor, with me being his first client and the planet’s best footballers following. World domination would soon follow. Again, a polite “no thanks” was necessary.

People have no comprehension of what being a footballer entails. An old schoolteacher asked me to coach some kids. I was happy to do it, but he suggested: “We can do it at 12 on Saturday. You’ll be done by 1.30pm in time for your game at three.” He really thought I just turned up, put my boots on and played.

When you make it at a high level, demands on your time shoot up. And success makes you a magnet for hangers-on – yet some players encourage that.

Getting in with the crowd

Players arrive at a club in a new city and often don’t know anyone. The first friendly faces they see are taxi drivers or the hotel staff. I’ve seen several examples where both types have quickly become the player’s mate and started turning up in the players’ lounge.

Some single players need the security of a ‘mate’ – probably to stop the boredom of being alone. Before long, the new mate is on team nights out laughing and joking with the players, yet well out of their depth financially when it comes to getting in the drinks.

Play his cards right and he can become mates with the whole team, and be the man who receives more spare tickets than anyone else – the city’s go-to guy. I’ve seen mini-empires built like this, and you wonder what they were doing with their lives before. The empires can quickly collapse when a player leaves the club or meets a girlfriend. Easy come, easy go.

I don’t like it. I’ve also seen newly inflated egos popped by players, including one withering putdown by the captain, who said: “Oi, Billy Big Bollocks. What is it you do? Taxi driver?”

Worming a way in

Players like people who can give them the things they desire: cars, clothes, girls and hotel rooms. At one club, a sponsor was senior at a very good hotel chain and sorted the lads out with cheap five-star rooms. He was soon joining our team nights out. I wasn’t comfortable with it all.

Once, the car washer wormed his way into a position of power to the point that he had his own space in the car park and was socialising with players on a regular basis. He charged £60 per car – £50 more than I was used to paying. I didn’t take advantage of his services and he was off with me, asking why I didn’t let him do my car “like everyone else”.

The only mate I’ve brought on a night out was my brother, who came to pick me up from a club function when I was drinking. The other players really liked him and his larger-than-life personality, and encouraged him to stay. He duly got plastered – and needed to call one of his own mates to come and collect us both.