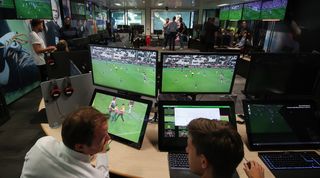 Thankfully, the emotion has been drawn from events at Goodison Park on Sunday evening. In the days since, most importantly, Andre Gomes has had a successful surgery and is expected to make a full recovery.

The Football Association have also upheld Tottenham’s appeal against Son Heung-min’s red card and, as a result, he will serve no suspension.

All the practical imperatives have been dealt with and the players, teams and supporters can, hopefully, move on. In fact, more generally, it was a situation which actually showed the game’s rarely-shown better side, exhibited most admirably by Everton's Seamus Coleman, who took it upon himself to visit the Spurs dressing-room to console a devastated Son.

Coleman deserves great praise for helping to diffuse a situation which could have become far nastier. He behaved as a captain should and that reflected well on both him and his club.

Son Heung-min is sent off for a tackle on Andre Gomes, who is stretchered off with a horrifying injury, with both sets of players are visibly distressed.

Unfortunately, The FA’s decision hasn’t quite drawn a line under the episode. The short-term issues have been solved, but the role of the PGMOL (the board responsible for match officials) and the Premier League in the matter is worth a second glance – not just because another VAR failure has been laid bare, but because the subsequent failure to properly acknowledge the mistake was indicative of a strange culture of secrecy.

In this case, that began with the Premier League’s statement following the game, in which Martin Atkinson’s decision – which appeared to be based on Gomes' injury rather than the nature of the tackle, and which VAR didn't prompt him to correct – was quickly endorsed and supported.

“The red card for Son was for endangering the safety of a player which happened as a consequence of his initial challenge."

As many pointed out at the time, that threatened to create a very awkward precedent, in which any tackle could then become a sending off if an injury – no matter how misfortunate – was sustained.

Needless to say, with the framing of The FA’s independent verdict, the Premier League’s statement appears now to have been an impulsive, instinctive and myopic attempt to retrospectively justify an officiating botch and circle the wagons around the maligned VAR system.

Which, in itself, wouldn’t be nearly so troubling if it hadn’t occurred so soon after another curiosity – the adjusted ‘bar’ for penalty decisions, which has clearly been lowered in spite of claims to the contrary.

The Premier League clubs will meet in the middle of November to formally discuss the use of VAR, but the recent surge in penalty awards clearly indicates that a change in refereeing policy has taken place. Consider, for example, the two recent incidents involving Gerard Deulofeu: the Jan Vertonghen tackle at White Hart Lane which wasn’t deemed a penalty and, more recently, the Jorginho trip that was.

The difference cannot just be explained by a variance in interpretation; a different standard was being applied. As it was for Everton’s visit to Brighton, for the ludicrously soft penalty awarded against Michael Keane. Or the one given in favour of Daniel James during the same weekend, after a tackle by Norwich’s Ben Godfrey.

How the Premier League table would look without VAR this season

The refusal to be more open is hard to comprehend, particularly given how important communication was always going to be crucial to VAR’s acceptance. Unfortunately, that depends on a pair of organisations – the Premier League and the PGMOL – whose habit is to finesse situations in their favour and find a way around having to acknowledge a mistake.

With regard to the PGMOL, these clandestine tendencies have been suspected for some time. In September 2016, former referee Mark Halsey revealed on social media that he had been encouraged to pretend that he hadn’t seen controversial incidents in matches.

In claims that were refuted, Halsey also suggested that he was pressured into not including such events in his match reports, to allow for retrospective action to take place against players.

If the accusation is believed and accepted as being representative of a certain attitude, it portrays an organisation with an almost infantile fear of accountability. One in which acknowledging mistakes is anathema to procedure and where admitting weakness or culpability is seen as fundamental to preserving credibility.

Describing that as juvenile would be generous. With regards to VAR, it’s also counter-productive. Because of the nature of the issue, its sensitivity, and the inevitable, periodic need for trial and error, compromise and the occasional mea culpa, it’s just not possible to proceed in the same way. It can't be so political; there can't be spin.

Instead, the conversations about VAR have to be co-operative. Admitting mistakes is also important, because it reassures supporters that obvious flaws aren’t just being ignored and that some kind of refinement is taking place. That kind of transparency is fundamental to this process.

Unfortunately, on current evidence, the necessary organisational maturity to provide it just doesn’t seem to exist.

COMMENT 5 things the Premier League should do to improve VAR