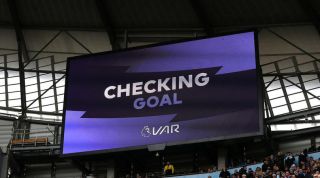 Fractional offsides, endless debates about the handball rule, and lots of fans now making big square gestures in the stands. VAR has firmly arrived in the Premier League and has dominated the conversation ever since.

For all the debate about its benefits or whether or not it's being used properly, the question remains: without it, would anything be different?

According to a study from bettingexpert, the answer is yes. Although not much.

Brendan Rodgers may be winning huge plaudits for the way he's transformed Leicester City into an unstoppable attacking force, but they've got VAR to thank for three points this season. Without it, they'd still be in the top four, but four points off Chelsea in third, who'd actually be one point better off without it.

5 things the Premier League should do to improve VAR

Southampton and Crystal Palace have also got VAR to thank for an extra three points, keeping Palace in the top half of the table and Southampton off the bottom.

As for those who have the most to complain about, Wolves fans will be fuming upon seeing the revised table.

Nuno Espirito Santo's team were tipped at the start of the season to break into the top six, but a sluggish start coupled with their Europa League travails sees them in 12th, with just two wins from eleven games.

However, four points have been snatched away from them by VAR, and those four points would put them in the top six, a point behind Arsenal.

Even the title race would be closer if VAR was not in operation. The six point gap between Liverpool and Man City is far from insurmountable, but the extra two points City would have under normal circumstances would give Klopp's men cause to look over their shoulder.

The accepted wisdom has always gone that bad decisions even themselves out over the course of the season, or maybe that's just what aggrieved managers have been telling themselves to stop them stewing over disallowed goals and soft penalties. Over the first eleven games at least, VAR is undoubtedly having an impact on the runners and riders of the league - but will things be different come May?

Here's the full Premier League table if we were living in a world without VAR (with the points difference from the real world in brackets):