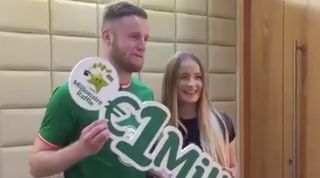 O'Connor, who joined Championship side Preston in July from Cork City, was bought the ticket by uncle Peander Murphy on December 14.

A few weeks later O'Connor received the news that he had won €1 million – but only after being urged by his mum to check his numbers, after she heard the winning ticket had been sold nearby.

He told BBC Sport: "After some searching I sent them a picture of the ticket, but I never really believed that it was the winner of the one million euro prize."

The 22-year-old Irish defender, who has made nine appearances for the Lilywhites this season, admits it's been a whirlwind two days since finding out he's a millionaire.

He added: "I don't think the win has sunk in yet. I have no immediate plans but it will take a few days before we make any decisions.

"The important part of today was having my family with me, so they will be at the forefront of any plans."