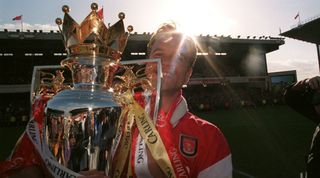 All six of the Premier League’s ever-present clubs reached 1,000 games at the end of the season. We’ve already quizzed you on Manchester United’s highest appearance-makers, so now it’s time for the north London club who brought continental flair to the Prem in the late ’90s.

That said, Arsenal’s highest Premier League performer is a homegrown face. Elsewhere, there are exotic talents from France, the Netherlands, Brazil, Sweden, the Ivory Coast and – Lord, save us – Denmark.

Each of these players have featured in over 100 Premier League games for the Gunners, so it’s time to get naming.

Tell us your score @FourFourTwo – we’ll retweet the best, if you don’t give answers away. Anyone who gets 50/50 is probably just Arsene Wenger, we assume. Thanks for playing, Arsene. Now challenge your pals (Pat Rice will love it).