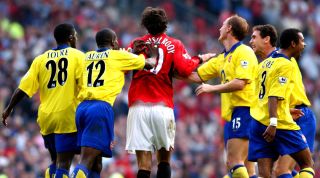 Fisticuffs, fines, penalty shootouts, extra-time winners: fixtures between Arsenal and Manchester United have been heavy on needle for nearly 30 years.

The climax of their grudge seemingly arrived in what was nicknamed The Battle Of The Buffet – a backstage scrap following United's 2-0 win at Old Trafford in October 2004. Back then, a score was settled by an unnamed Arsenal player definitely called Cesc Fabregas who lobbed a pizza at the bonce of Sir Alex Ferguson as both teams returned to the dressing rooms.

The resentment has hardly abated since then, though the fact that this unseemly scrap hasn't made it into our top 10 of clashes between these two sides – nor the 8-2 humiliation of Arsenal in 2011 – says a lot about the calibre of their footballing rivalry...

QUIZ!Can you name the players who've scored in a Premier League match between Manchester United and Arsenal?

This was the last fixture played by the Busby Babes before the Munich air disaster. Five young men in United's starting line-up at Highbury that day were killed – Duncan Edwards, Tommy Taylor, Mark Jones, Eddie Colman and skipper Roger Byrne. Taylor (twice) and Edwards both scored in this epic fixture that also featured goals from Bobby Charlton and Dennis Viollet.

While this was a match that always seemed beyond Arsenal's grasp (they were 3-0 down at half-time, which included an impressive strike from Edwards), they did at least bring drama to the tie. Jimmy Bloomfield scored twice to draw the scores level at 3-3 before Viollet and Taylor put the match beyond their hosts in what was a dramatic and fitting farewell to English football.

An FA Cup final decided in five minutes of brain-melting chaos. With Arsenal leading 2-0 at half-time, a side which featured the likes of Liam Brady, Frank Stapleton and Pat Jennings looked to have laid rest to the ghosts of their previous FA Cup campaign, where they'd lost at Wembley to Bobby Robson's Ipswich.

That exorcism quickly took on Derek Acorah levels of credibility when United drew level in inexplicable circumstances, scoring in the 86th and 88th minutes with goals from Gordon McQueen and Sammy McIlroy. Arsenal's panic was calmed at the death by broccoli-haired striker Alan Sunderland, whose winning goal – a lunging strike at the back post – inspired one of the most memorable celebrations in cup final history, all fist pumps and wobbling barnet.

The match that lit the gasoline. When table-toppers Arsenal lost at Old Trafford in grumpy circumstances, the result destabilised a promising title charge; the ensuing fisticuffs kick-started nearly 30 years of bad blood thanks to a robust performance from midfielder Norman Whiteside, who was later described by defender David O'Leary as "a wild nutter".

The Northern Ireland international landed his boot on the arse of just about everyone not in a United shirt as they kicked their way to a 2-0 victory. That Whiteside escaped the ref's notebook was an aberration; 19-year-old Arsenal midfielder David Rocastle didn't, and was sent off for lashing out in retaliation.

"There was a big row coming off the pitch," said Arsenal gaffer George Graham. "Alex Ferguson and his assistant Archie Knox were right in our faces and I thought, 'Jesus Christ! That'll be the first and last time they intimidate us. We're not going to be bullied anymore.'"

In what would become a thrillingly regular occurrence, Arsenal and United's teams went head-to-head in a mass brawl where Paul Ince shoved titchy Gunners winger Anders Limpar over an advertising hoarding.

The spark arrived with Arsenal leading 1-0 from a Limpar goal. But when team-mate Nigel Winterburn lunged at United's Denis Irwin with a spicy tackle, his act of aggression triggered a 21-man scrap from which only David Seaman had the decency to maintain distance.

The ruckus resulted in a one-point deduction for United and two for Arsenal, who'd been involved in a similar incident the previous year against Norwich. The terrors.

"I couldn't believe what I'd just done," said United striker Brian McClair afterwards. "The worst thing of all was watching myself on television behaving very badly."

A month after their first bout of slap and tickle, these best of enemies met to put the rumble in the Rumbelows Cup. Sadly, it failed to deliver the spit and sawdust punch-ups of the autumn's previous meeting. Instead, English football was introduced to the full brilliance of 19-year-old winger Lee Sharpe, who scored a triumphant hat-trick and infamously gyrated around a corner flag.

Meanwhile, Danny Wallace, freshly deployed as a centre-forward, proved unplayable against an Arsenal defence noted for being particularly stingy (indeed, they leaked only 18 goals in this title-winning campaign). Wallace's impressive performance proved a highlight in his otherwise average United career.

With three games in hand and only six points behind league leaders United, Arsenal were very much in control of their own destiny. A win at Old Trafford would halve the gap and land a psychologically crippling blow. A defeat would hurl momentum United's way. Talk about dramarama.

Not-yet-Sir Alex Ferguson's men held out until the 79th minute when a long ball from Martin Keown was flicked into the path of Dutch winger Marc Overmars by his international team-mate, Dennis Bergkamp. With a cheeky poke, Overmars stabbed the ball through Peter Schmeichel's legs, along with a knife to United's title ambitions. Arsenal went on to win the Double in Arsene Wenger's first full season in north London.

This pivotal fixture in United's charge towards a historical treble was decided in gruelling circumstances. Down to 10 men after Roy Keane's dismissal and carrying a walking wounded Ronny Johnsen, United progressed to extra-time in this FA Cup semi-final with the odds stacked against them. They barely strung a pass together in the closing stages of normal time.

And then along came Giggsy, wiggling his way through the Arsenal defence before smashing the ball past keeper Seaman in an attack reminiscent of a drunk negotiating a phalanx of high street traffic cones. His celebration – a shirt-waving fit of histrionics that revealed a Magnum PI-style chest bush – was later cited as the stylistic inspiration behind Peter Jackson's King Kong remake. Honest.

With United aiming at a fourth consecutive title grab, Arsene Wenger's men – who were also in line for the league – sized up their opponents. United had been knackered by a gut-wrenching Champions League semi-final defeat to Bayer Leverkusen on away goals in midweek, and the verdict was that Fergie's men were psychologically bruised and there for the taking.

That assessment was spot on. Arsenal staged a smash-and-grab raid that halted United's charge and instead won them the title in the penultimate game of the season.

It this was hardly undeserved: Sylvain Wiltord's 57th-minute winner meant Arsenal had won 12 matches on the spin in a season that yielded the Double.

If you really want to get to the nuts and bolts of Patrick Vieira's dislike for United striker Ruud van Nistelrooy, then read his autobiography for the gory details of 2003's infamous Battle of Old Trafford.

"Everything about him annoys me," wrote the Frenchman. "He's always ­complaining, whinging. The man is a cheat and a coward. Everyone thinks he's a nice guy but in fact he's a son-of-a-bitch."

The cause of this ire was a retaliatory kick from Vieira on the Dutchman which resulted in a second yellow of the afternoon for the Arsenal midfielder and a mass brawl. Van Nistelrooy later took a tumble in the Gunners' penalty area to win a spot-kick which – karma fans, take note – he missed, prompting antagonistic, boggle-eyed celebrations from Martin Keown, who regressed to the mental state of a 12-year-old playground bully.

Keown was later banned for three games and received a £20,000 fine for his tantrum. Roy Keane, Ray Parlour, Vieira and Ashley Cole also picked up fines. "We could have paid for a new roof at the FA for the amount we paid in fines over that incident," grumbled Keown.

Hardly a showpiece match, or a game big on drama for that matter – far from it – but in terms of snatching victory from the jaws of defeat, Arsenal delivered a telling lesson.

Comprehensively outplayed during 90 minutes and extra-time – The 1 in Arsenal's 4-5-1 was actually false nine Dennis Bergkamp; Wayne Rooney hit the post; a Van Nistelrooy shot was deflected onto the bar – they took the cup on penalties, with a Juve-bound Vieira scoring the winning kick.

"As a team, we were not as sharp as we can be," said Wenger. "But we are so resilient, and our team spirit is so strong. When you have such solidarity in the team, such mental unity, even when you don't play well you can win."