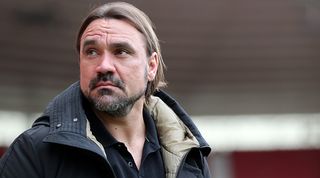 FourFourTwo’s May edition is in shops now, featuring our countdown of the best players in the Football League. Supporters voted for these players, so if you hate the list, you literally hate all football fans.

But if you disagree with the below, have at us. This is FFT’s pick of the Football League’s best managers this season, from the top of the Championship to the bottom of League Two (not that the bottom of League Two is especially well-represented). The criteria: achievements relative to expectations, resources and budget, plus generally being good and stuff.

First, we’ve honourable mentions for Neil Adkins and Graham Potter in the Championship, building encouraging teams at Hull and Swansea in the face of off-field problems, as well as John Coleman in League One (Accrington were promoted on one of League Two’s smallest budgets yet have just about held their own at a higher level) and Michael Flynn in League Two (an astonishing two years as Newport’s manager bringing memorable cup runs and potentially still a play-off berth).

Now, to our distinguished dozen…

When the season started, Bowyer didn’t even know if he was Charlton’s manager. The club were in crisis, with staff working in semi-darkness to keep the leccy bill down, and Bowyer, in his first managerial role, was still caretaker in September having begun in March. To not only keep the Addicks steady but secure a play-off place, despite losing top scorer Karlan Grant to Huddersfield in January, is some effort.

Yes, really. The manager whose team lost 6-1 the other week. Rotherham are unfortunate to be in the bottom three, giving seriously rough rides to the division’s top teams and winning more points at home than the promotion-chasing pair of Bristol City and Middlesbrough, only to be undone by so many results going narrowly against them.

Warne picked up Rotherham during the worst campaign in Championship history and won promotion at the first attempt; given that half of his team have barely played at this level before, keeping them up would be even more impressive. A 2-1 win over Nottingham Forest on Saturday showed what they're capable of.

So why isn’t Cowley higher? Because the 40-year-old’s good work meant Lincoln were one of the 2018/19 promotion favourites, with several players who simply shouldn’t be in League Two, including Jason Shackell, Michael Bostwick and John Akinde. That he’s in this list at all is testament to how dominant his team have been.

INTERVIEW Pablo Hernandez: the power behind the Leeds throne

A quarter of the way through the season, Preston were bottom of the league. They’re now five points from the play-offs, and it was previously two. Neil was present for that bad start, of course, but nevertheless his side have since been one of the Championship’s standout performers despite their squad featuring few whom the casual observer would single out as top-six players (apart from the marvellous Alan Browne and perhaps the ageless Paul Gallagher).

Neil is coaching and coaxing the best out of signings from lower divisions, such as ex-Exeter pair Jordan Storey and Jayden Stockley. Watch this space.

Several in pre-season, including FFT, thought Donny might struggle. Even their Fan File in our Season Preview – where every supporter tips their club for promotion or a play-off push – predicted a 17th-placed finish. McCann has made a mockery of such worries: in his first season, Doncaster are League One’s second-top scorers and occupy a play-off place ahead of Peterborough, who sacked McCann last year.

They press, attack and create countless chances – yet Barnsley also have the best defence in the whole Football League. Stendel’s tactical nuance and off-field bonding has created a team where everyone knows their roles, and while Barnsley were expected to manage relegation well (although so were Burton, currently mid-table), he could hardly have done better in his first year with a squad that, remarkably, features no player older than 26.

Cowley has made Lincoln champions elect and Bury’s Ryan Lowe is League Two Manager of the Season, because obviously it must be announced in March, but Mellon deserves enormous credit for his work with Tranmere. The Scot previously took Fleetwood from the Conference North to the League Two play-off places before a bafflingly premature sacking, and now his Tranmere side are pushing inexplicably hard for back-to-back promotions.

Although he has runaway Golden Boot leader James Norwood to thank for many a narrow win, Mellon masterminded seven consecutive wins with only two goals conceded – a run ended by Oldham last week.

Before we’re inundated with sceptical emojis from Stoke fans bored after four consecutive 0-0 draws and one 1-0 win, Jones’s inclusion is based on the half of 2018/19 that he spent taking promoted Luton into League One’s top two. Even after Jones’s departure, the Hatters are reaping the rewards of his excellent work, with caretaker boss Mick Harford admitting" “We just carried on and didn’t change much.”

The Welshman has struggled to make his 4-4-2 diamond work at Stoke, who have scored seven goals in his first 13 league matches, although he has at least improved the defence. He’ll do far better next season with his own squad.

Yes, those regular barren runs are a concern: two points from five games in early autumn; four straight defeats in late autumn; another five winless games before last weekend. But then you have those months of invincibility, which have taken Bristol City to exciting heights.

There’s never been a streakier manager, which is odd considering Johnson isn’t some momentum-riding shouter, but a canny tactician – see how he adapted City’s setup to win away at Sheffield United, then Middlesbrough three days later. However you look at it, they’re sixth, having lost their best defender and their best attacker last summer.

Any of our top three could be No.1, so let’s be positive. Bielsa hit Leeds like a whirlwind and transformed the club almost overnight, yet they’ve maintained his incredibly high standards, treating the end of the season like the end of every match: refusing to yield.

Two weekends ago, Bielsa’s men trailed Millwall twice but Pablo Hernandez snatched a win just as promotion rivals Sheffield United were doing the opposite against Bristol City – a one-minute, six-point swing. Last weekend, the Whites couldn't prevent defeat at Birmingham, however, while the Blades scythed down Preston. A thrilling battle for second.

‘Making miracles on scant resources’ screams ‘wheeler-dealer’, but while Wilder does love a bargain and his starting XI cost in the region of £7m, his strength is in improving players. It’s to his credit, and probably his chagrin, that John Fleck, George Baldock, Enda Stevens et al are blithely assumed to have always been Championship stars in waiting.

Wilder wrings the maximum from players whose peak had seemingly either passed or never materialised, while being flexible, tactically innovative and managing a squad, injuries and expectations.

OPINION Why Chris Wilder deserves Championship Manager of the Year

Stuart Webber’s recruitment has been superb, but it takes great coaching to turn talents into title contenders. Farke’s most common starting XI includes three youth products, a signing from the Danish league and another from the Dutch league, as well as a Spanish second-division player, a pair from Germany’s second tier and one, incredibly, from the fourth.

The development of under-21 defenders Max Aarons, Jamal Lewis and Ben Godfrey has been thrilling to watch, while Farke’s experimentation has created a pressing system that works to perfection. Norwich’s refusal to bow to short-term thinking after his difficult first season, in the face of major cost-cutting as their parachute payments ended, should be an example to clubs who choose panic over patience.

AWFUL! 6 of the most shocking Premier League runs of form EVER

QUIZ! Can you name the 29 managers who’ve taken charge of three or more Premier League clubs?