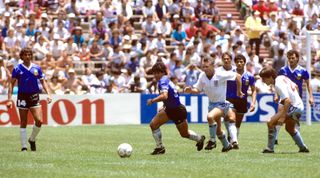 You’ve seen the Best Goal Ever a zillion times, but it still looks tasty.

England’s players continue to point the finger at each other ("they’re all to blame – nothing to do with me," protested Peter Reid recently) but the fact remains that the Argentine wiggles like an lubed eel past top-notch tacklers like Reid, Fenwick, Butcher and Stevens before slotting the ball coolly into the English net. "The Thermos-head Shilton didn’t see that one!" said Diego later, confirming his utter genius and madness all at once.

Mazy mayhem from the master: Maradona resembles a cocky playground superstar dribbling through some wheezy asthmatics from maths club – and this was arguably harder to score than the much-trumpeted England one.

The Argentine receives the ball 50 yards from goal, but this time there are four Belgian defenders well-positioned. He strolls through them, dragging three of the saps to his left before dinking over keeper Pfaff. "World class, in the best sense of the word," gargles Motty hysterically. True, that.

A tap-in, but one at the end of a beautifully constructed passing move of which any classic Brazil side would have been proud.

An exquisite, quarterback-style ball from Glenn Hoddle is headed down by Lineker on the wing. He bombs forward and Peter Beardsley re-feeds him. Links pauses at the edge of the area and cuts it back to Trevor Steven, who rolls it nonchalantly to an advancing Gary Stevens (like Pele to Carlos Alberto in 1970, with added mullets). Stevens’ cross is met perfectly by the advancing No.10 (who went on to score a hat-trick). Delightful.

The goal that sealed Argentina’s second World Cup was an absolute humdinger – scored with the game poised at 2-2 and momentum with the Germans. But as so often happened that summer, who were Argentina gonna call?

Undisputed man of the tournament Diego Maradona's defence-dividing pass allows Burrachaga to evade a German backline that had conceded just six times in their previous 10 games. The forward takes two touches, clipping it accurately past Harald Schumacher, before collapsing to his knees in jubilation. "To have these memories is the dream of every footballer," he said later.

Belanov was a star of this truly great USSR team, and he notched a superb hat-trick against the Belgians.

His first was the definition of the word ‘thunderbolt’: the European Football of the Year elect picks the ball up on the edge of the Belgian area, takes two touches to set himself, and then launches something that Soviet missile boffins would have been proud of. His effort rockets into the far top corner of the net before the goalkeeper has any idea what’s going on. Genuinely amazing.

Surely the best volley in the tournament’s history: an acrobatic scissor-kick that came at the end of a move during which the hosts toyed with Bulgaria.

Negrete receives a high ball outside the penalty area, controls it and exchanges first-touch chips with Javier Aguirre. Teed up to perfection, the forward wallops it past a hapless Boris Mikhailov into the bottom left corner. In a uniquely Mexican celebration, Negrete gets his hair pulled, his head slapped and is then bundled to the ground by his barmy team-mates. Charming.

A piledriver to rival any other. True, Josimar had space to set himself, but the finish was scientifically precise.

Receiving the ball 35 yards out and with two defenders and the goalkeeper positioned unbeatably between him and the onion bag, no sane person would shoot. Josimar, however, strikes the ball with incredible accuracy down the only corridor of space available, and with such velocity that it’s still rising when it hits the back of a baffled Pat Jennings’ net. Josimar should have been awarded a PhD for this one.

An absolute monster of a goal. A headed clearance from the French is picked up by Belanov – himself no stranger to the spectacular – and lays off to Rats, who from 40 yards out has three French defenders, a goalkeeper and the awkwardly positioned referee to beat. It matters not.

The man in black leaps out the way in the nick of time, and Rats spanks it left-footed past the amusingly-named Joel Bats in the French net and into the top left-hand corner. Unstoppable.

Careca scored five World Cup goals in 1986 – only Gary Lineker could deprive him the Golden Boot – but none better than this. And not for the only time, Northern Ireland were on the receiving end.

Having already notched one cracker, the striker runs full pelt at the Ulstermen’s defence. He ghosts past two men and feeds Elzo, who backheels it (of course) into Careca’s path. He promptly larrups the return pass into back of the net. A goal that only Brazilians could make look simple.

Laudrup has a Danish Knighthood, was voted his country’s Golden Player of the last 50 years and has an executive lounge at Brondby named after him – all thanks to breathtaking play like this. While Maradona jinked, Laudrup glided.

Here, Uruguay fail to clear and the ball falls to Laudrup. The elegant Dane drifts past one defender, cuts inside another, then sweeps through the last man and goalkeeper to pass into an empty net. Elegant, cocky and quite brilliant.