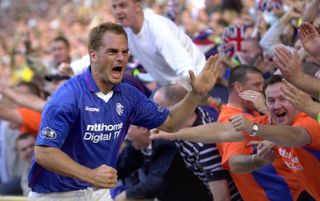 The former Ajax, Barcelona and Rangers attacker also made 67 appearances for the Netherlands, scoring 13 goals.

And De Boer has revealed that he twice came close to moving to the Premier League, first with Arsenal during the early years of Arsene Wenger’s tenure in north London.

“Yeah, I did speak with Arsene Wenger about joining Arsenal,” he told FourFourTwo, in the new issue out now. “That was before the 1998 World Cup. He called me to ask if we could meet, so that he could explain his ideas in person.

“We met at the Okura Hotel in Amsterdam. He said I could be an important player for his Arsenal team and he demonstrated what my role could be. He was keen to sign me and I was happy to join: I felt like this kind of opportunity might not come again.

“Everything would be finalised after the World Cup. I remember speaking to David Dein on the phone, discussing my salary and the duration of my contract. Everything was sorted; it was only down to Ajax and Arsenal to agree a transfer fee.

“But me and Frank [de Boer, his twin brother] played very well at the World Cup and Ajax suddenly said they didn’t want any of us to leave – they wanted to retain the core of the team. We both felt misled, so decided that we wanted to leave Ajax immediately.”

De Boer stayed in Amsterdam for a few more months, before departing for Barcelona in January 1999.

He then had the chance to join Manchester United in summer 2000 but was advised against the move by Van Gaal, who had recently quit as Barcelona boss and would later take charge at Old Trafford.

“I remember being in the Barcelona kit room, speaking to Alex Ferguson on the phone. He told me he was keen to sign me for United, and explained how he’d use me in midfield.

“But around the same time, Dick Advocaat approached me on behalf of Rangers. I remember being in the Dutch camp, talking about my future with Van Gaal, who had since become the head coach of the national team.

“I asked him what he thought. He said that at Rangers I’d always play, which would be better for me as a 30-year-old, and for my role in the Dutch team as well.

“I chose Rangers, also because of my knee, which wasn’t perfect. I wasn’t injured, but I thought I might not get through the United medical.

“At Rangers I was able to sign for four years, which gave me some certainty. If Van Gaal had advised me to join United, however, I would have done that. I really valued his opinion.”

Read the full interview with Ronald de Boer in the Autumn 2019 issue of FourFourTwo magazine, out in shops and available digitally now. We also chat to Raheem Sterling, meet Lazio’s ultras, discover how to make Real Madrid and Barcelona great again, catch up with John Barnes and much, much more. You don’t want to miss it.