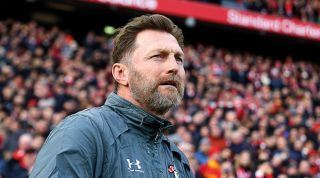 He is loved by fans, respected by his players and committed to the club’s model. Combine that with Ralph Hasenhuttl’s style, personality and methods, and it’s hard to see how things won’t improve at St Mary’s this season.

Only the two Manchester clubs won more points than Hasenhuttl’s developing side after the restart, with Saints recording five wins and just one defeat in their nine fixtures behind closed doors.

Southampton finished 11th, having emphatically extinguished talk of relegation and underlined the strides they’ve made under their affable, tactically astute Austrian boss.

Hasenhuttl would freely admit that the journey to this point has been far from straightforward. Having helped to stave off the drop following his appointment in December 2018, the 2019-20 season was a challenging one, in which a wet and windy October night crystallised the issues at hand.

Saints fans couldn’t escape continual references to their 9-0 home shellacking by Leicester – the scoreline even trended on Twitter after Southampton’s captivating 1-0 defeat of Manchester City eight months on.

But as irksome as such talk was, it is also key to understanding why Saints can be even better.

Having drifted away from their position as a model mid-sized club, Southampton now appear close to retaking that role. They have refocused on recruitment under consistent, clear-minded leadership.

Recognising Hasenhuttl’s value is why the hierarchy had no issue sticking by their man last year, allowing him to fix playing issues and fast-track the rebuild. He has rewarded this faith with an entertaining side that played with confidence and energy post-lockdown, a period in which he helped to produce a blueprint for the club’s future and signed a new deal lasting until 2024.

Southampton are determined to bring through young talent and to polish potential. They back Hasenhuttl to return the club to the top half – perhaps even European qualification. There is plenty of work to do. Consistency of performance across the season will be key, as is the desperate need to improve Southampton’s woeful home form.

But things look likely to come together under Hasenhuttl, whose impressive body of work since that miserable October night warrants the optimism. After all, only six Premier League sides picked up more points after that 9-0 humiliation – and Leicester weren’t one of them.