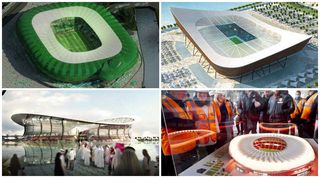 How they must have laughed at the meeting when the architect outlined his vision for Bursaspor's new home. "Your nickname is the Green Crocodiles, I notice. What about a stadium that looks like one?"

But the stadium definitely looks like a crocodile, complete with green scaly roof, and soon to be finished off with a fearsome crocodile's head jutting out of one corner of the stadium. The 44,000-capacity arena has two crocodile tiers (sorry) and the Turkish club currently aim to open their new venue in January. We just hope they've lined up Dundee as opponents for the first match.

Russian to a conclusion

The Timsah Arena has been four years in the making, a timescale that fans of Russian club Zenit must marvel at. Work on their new stadium in Saint Petersburg started in 2007, giving them a rather comfortable 11 years to get it built in time for the 2018 World Cup. Eight years on, and the strategy of building it one brick per month doesn’t seem to be working out too well.

The 69,000-capacity Zenit Arena on Krestovsky Island was due to open in December 2008 but is still unfinished. Despite not resembling any animal whatsoever (quaintly, it just looks like a stadium), the venue has been hampered by a series of delays – including a redesign to meet FIFA requirements.

Russian gas giants Gazprom also withdrew funding, meaning the city government of Saint Petersburg had to step in. Plans for a grand opening next year remain approximate and subject to possible further delays.

Three years away from the World Cup, Russia still have plenty of work to do. Of the 11 stadiums due to host matches, only three are currently in place – Sochi’s Olympic Stadium, the Kazan Arena and Spartak Moscow’s new Otkrytiye Arena.

The vast 81,000 Luzhniki Stadium in Moscow, due to host the final, is being renovated and should re-open in the spring of 2017. New stadiums are being built in Samara, Saransk, Kaliningrad, Rostov and Nizhny Novgorod, while venues are being upgraded in Yekaterinburg and Volgograd.

There is less need for haste in Qatar, where they have until 2022 to complete their swathe of new venues. Among them will be the modestly named 86,000-capacity Lusail Iconic Stadium. FFT presumes that the other names considered were the Lusail ‘Best Stadium In the World Ever, In Your Face Maracana’ Stadium or the Lusail ‘We’ve Got Loads More Money Than You, Just Deal With It’ Stadium. It will be encircled by a reflective pool of water and will feature a spectacular roofing design capable of covering the entire pitch.

Sweeping new venues will also be built in Al Khor and Al Wakrah, while Umm Salal’s conceptual design is based on traditional Arabian forts. In Ash-Shamal the new venue is supposed to look from afar like a traditional dhow fishing boat waiting to launch from the shore. To us, the artist’s impressions still look pretty much like a football stadium, but there we are. Four new stadiums will be built in Doha.

The only new venue still to open ahead of Euro 2016 in France is Lyon’s Stade des Lumieres. Yes, that's the 'Stadium of Lights', presumably trumping Sunderland and Benfica by having more than one floodlight. Or something.

The grandiose continental tour that is Euro 2020 will welcome two fresh stadiums, the New Puskas Ferenc Stadium in Budapest and the Eurostadium in the not-particularly-attractive-sounding Belgian municipality of Grimbergen. It’s just outside Brussels and will also become the new home of Anderlecht.

Bilbao’s new San Mames – opened two years ago – will be the only Spanish venue to host Euro 2020 games but arenas are being built elsewhere in the country, with Valencia making the building work in Saint Petersburg look positively efficient. Work on the Nou Mestalla first began in 2007 but financial issues and red tape have plagued the project and a new design was unveiled in 2013 in an attempt to reduce costs. It still sits half-finished, a completion date not known.

RECOMMENDED Islands, gardens and power stations: 8 stadiums that never were

Atletico Madrid have also been due to move, leaving the Vicente Calderon for La Peineta (The Comb) once it is expanded from 20,000 to 70,000 seats. The move was supposed to happen in 2012 but repeated delays and spiralling costs have increased the possibility of Atleti staying put.

Elsewhere in Europe, AEK Athens are set to build a new 34,000-capacity home called the Hagia Sophia Stadium, named after the Greek cathedral in Istanbul, while Roma are due to leave the Stadio Olimpico for the new Stadio della Roma.

Across the pond, New York Cosmos have plans for an extravagant 25,000-seater home, with DC United set to move to a new spot at the intriguingly named Buzzard Point. FFT hopes the stadium will be designed like a giant buzzard. But maybe the crocodile was ambitious enough.