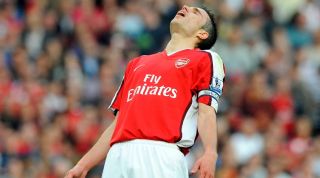 In the 1985/86 campaign, Manchester United won their opening 10 Division One matches (then messed it all up). A season later, though, the Red made a disastrous start by losing three on the bounce to Arsenal, West Ham and Charlton.

In part, it was a hangover from the previous campaign, when United limped home in fourth after looking near certainties to end their long title drought. However, their poor form at the start of 1986/87 was due mainly to the absence of talismanic skipper Bryan Robson, who’d dislocated his troublesome shoulder in July against Morocco at the Mexico World Cup.

“There were a number of reasons I lost my job,” reflected a disappointed Ron Atkinson, who was sacked in October, “but the absence of Robbo after his shoulder surgery was key. He was the glue that held United together.”

QUIZ!Can you name the last 20 players to captain England?

At the end of a long but highly successful season with Liverpool, Welsh striker Ian Rush could already feel twinges in his knee. But following a home international against Northern Ireland in May 1984 on a rock-hard Vetch Field pitch, Rush admitted that the joint felt like “a rusty old gate”.

After struggling through the European Cup final against Roma, Rush had a cartilage operation in the summer, and missed the first 10 league matches of the 1984/85 season.

By the time he returned to the fold in late October, Liverpool were already trailing in city rivals Everton’s wake. Despite Rush plundering 14 goals in 28 games, the Reds finished 13 points behind the Toffees.

At the start of the 2009/10 campaign, everything was going swimmingly for a buoyant Arsenal and their Dutch striker Robin van Persie, who’d already netted eight goals in 15 matches. That purple patch came to an abrupt halt when the Dutchman was clobbered by Italy defender Giorgio Chiellini in a November friendly.

“I’ll be out for six weeks,” predicted a glum RVP – but it turned into six long months, during which time he received placenta treatment in a bid to heal his ruptured ankle ligaments. Arsenal – as usual – dropped out of the title race.

After missing the second half of the 2005/06 campaign with a metatarsal injury, Newcastle striker Michael Owen looked forward to returning to form for England at the 2006 World Cup.

Yet in the first minute of England’s final group game against Sweden, Owen’s studs caught in the ground and he ruptured his anterior cruciate ligament, causing him to miss almost a year of playing time. Newcastle’s compensation claim netted them a hefty sum of around £6 million, which led to the FA doubling their future insurance coverage of England players to £100,000.

After enjoying a turbo-charged end to the 2001/02 campaign, as his superb form steered Arsenal towards the Double, winger Freddie Ljunberg was tipped to star at the World Cup in Japan and South Korea.

But as Sweden prepared for their opener against England, Ljungberg felt a searing pain in his hip and admitted that he’d felt a twinge against Japan in a pre-tournament friendly. Coach Lars Lagerback insisted he stop training because “…you never know with football”.

Ljungberg (almost literally) limped through the England game, and although he recovered in time for the 2002/03 campaign, the player admitted: “I was never quite the same after that injury. I always played within myself a bit more.” Manager Arsene Wenger claimed to be less than impressed with the way in which Ljungberg “had been pushed beyond his physical limits at the World Cup”. Arsenal failed to retain the title.

Before West Ham striker Dean Ashton broke his ankle in an England training session in August 2006, he was all set to make his debut for his country against Greece. But following the clash with Shaun Wright-Phillips, Ashton’s football career descended, in his words, into “an injury-plagued nightmare”.

After nearly a year out for the Hammers, Ashton – a towering striker with a deft touch – returned, and was finally rewarded with a solitary England cap in 2008 against Trinidad and Tobago. Sadly he was forced forced to retire a year later at just 26 due to ongoing pain in his ankle.

“Often, an international break came at precisely the wrong time and resulted in a series of potential headaches,” wrote former Crystal Palace owner Simon Jordan recently. Citing the example of Finnish midfielder Aki Riihilahti, who got crocked “during a meaningless friendly with Italy”, Jordan pointed out that he'd picked up the player’s rehabilitation bill after he returned to Selhurst Park.

Then there was the case of striker Andy Johnson, whose confidence, Jordan insisted, was shattered after being “stuck out on the right wing” for England.

Jordan also insisted that starlet Wayne Routledge had his “head turned on England U17 and U21 trips and wasn’t the same again for us” after he put in a formal transfer request in January 2005, before signing for Tottenham in July.

Despite playing a limited role in Brazil’s triumphant 1970 World Cup campaign, mercurial forward Paulo Cezar Lima certainly enjoyed the non-stop partying in Rio following his team’s final victory over Italy. Granted a holiday by Botafogo afterwards, ‘Caju’ (by his own admission) “partied my ass off on the beach”.

So much so that when he returned to his club, Botafogo’s coach declared Caju as being “unfit to kick a ball”. He eventually got back to his playing weight and rediscovered his touch, but not before – Caju admitted – spending “six months in a World Cup-winning haze". Well if you're going to celebrate...