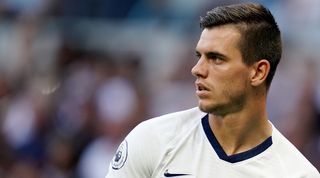 Tottenham have plenty of needs in the current transfer window, but none of them are as urgent as making Giovani Lo Celso’s loan from Real Betis permanent.

As things stand, Lo Celso’s move to Spurs would only be completed automatically if the team qualifies for next season’s Champions League. Jose Mourinho continues to pay lip service to that ambition, but the level of performance he’s currently overseeing makes it fairly unrealistic.

In which case, Tottenham would only have the option to sign Lo Celso, which – given Daniel Levy’s reputation for dithering over deals – should be enough to make anyone nervous.

Lo Celso is finding his feet in England. His assimilation was initially complicated by injury and, more recently, by Mourinho’s strange loyalty to Christian Eriksen. Increasingly, though, he’s the creative thrust within this side. Lo Celso can carry the ball dynamically and can carve all sorts of passing angles which, in a squad desperately short of such abilities, gives him unusual worth.

It also makes him a priority. Because of their financial limitations, Spurs must differentiate between their short-term needs and their long-term imperatives. A replacement forward for Harry Kane, for instance, would be preferable, but not absolutely essential. As the past demonstrates, this team has proven it can cope without Kane. Mourinho continues to pretend otherwise, who really knows why or for what purpose, but that in itself is not a reason to divert funds away from more important positions.

And there’s nothing more important than Lo Celso’s role, especially given that Eriksen is likely to leave the club in the very near future.

The mood around the Dane has obviously changed over the past 12 months, with the player’s application noticeably wavering, but he was still of critical importance during the Mauricio Pochettino era. In fact, his set of abilities was fundamental to the way that team played. To how it attacked, to how it switched its offensive focus, to how it built moves. Even now, even in diminished form, Eriksen's skillset remains unique and, as such, demands proper, full-time replacement.

Lo Celso provides a very convenient solution. He’s able to replicate a lot of what Eriksen did, but as part of an eclectic set of attributes which could, if managed correctly, provide far greater effect and variation. Ensuring his future, then, is really a starting point for Tottenham’s entire rejuvenation project; he should be signed before any back-up forward or replacement full-back and treated as an evolved version of what Eriksen was.

Evolved is the right description, too, because Lo Celso is a different proposition. There's overlap in the way that the two players each see the game, but little similarities in the rhythm of their influence. In a way, actually, both conform to their regional, footballing cliché.

Eriksen has his Scandinavian calm, he plays the game almost bloodlessly and in that detached, cerebral way. Lo Celso is the angel with a dirty face. He's the Argentinian ideal with all the technical gifts, but with the nuggety, spikey otherness too.

It's a tonal difference, really. Lo Celso plays with more frenzy, with more life. He'll run at a defence, take a defender on, and then maybe leave his studs up in a 50-50. And if he doesn't win that tackle, he'll run 40 yards to make another.

The Mourinho project he's trying to conform to is different, that's already clear, but many of the imperatives remain the same. The way space is created and exploited, for instance, or the need to progress the ball quickly and accurately from midfield. These are commonalities that transcend coaching styles and what ultimately makes players like Eriksen and Lo Celso so valuable. Without them, the entire functionality of a side is at risk. There's no point in buying more forwards if they can't be supplied properly, neither is there as much use in attacking full-backs if a team doesn't have the vision and craft to unleash them.

Tactically, playmakers have an inarguable worth, because they multiply the effect of everything around them. Levy needs to move to secure his club's creative future.

The other pertinent factor is that, if Spurs are without Champions League football in 2020/21, it will be significantly more difficult to attract players of Lo Celso’s standing. The combination of the Europa League and a relatively low wage ceiling does not make for the most compelling proposition, meaning that opportunities like this shouldn't be treated lightly.

The nightmare scenario is - which most supporters will have entertained in their darker moments - is that come the summer and without the assurance of additional revenue streams, Daniel Levy baulks at (what will by that point be) a higher asking price. Or tries to renegotiate it. Or irritates Betis to the point at which they refuse to re-engage.

Then, inevitably, would come the cheaper alternatives. The players who could perform like Lo Celso if not for their hidden flaws. A bad injury history, for instance, or a reluctance to do any sort of running without the ball.

But it's imperative that Tottenham remember where they’ve come from. New stadium or not, they need to recall how difficult it can be to sign Champions League standard players without actually being able to use the competition as a selling point. They must also appreciate how quickly a club can become locked outside that world if they fall into a pattern of procuring inferior players – if, for instance, they settle for lesser prospects for the sake of saving £10m here and £5m there.

So there’s a time to be prudent and a time to be self-aware. There's also a time just to pay up. Nothing that Spurs have done over the past five years now entitles them to a quiet life inside the top four. If they want that kind of permanence, then they must grasp these chances while they’re available.

Lo Celso is a rare player and this deal should have been completed yesterday.