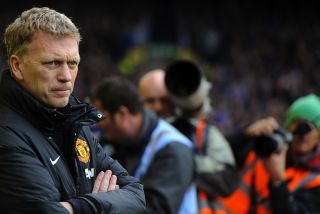 The first thing to note from a raucously loud, brilliantly atmospheric game at Goodison Park was that Roberto Martinez came up trumps in the managerial tactical battle. Everton's 2-0 triumph against Manchester United came as a direct result of the Spaniard tactically outmanoeuvring David Moyes, as the United manager returned to his former stomping ground after 11 years spent establishing Everton as an upper mid-table Premier League side.

The post-match press conferences revealed everything. Moyes felt United were in control of the game and pointed to his team's 60% possession - despite the visitors managing three times fewer shots than Everton in the opening hour of the game. "We played very well in the first half, to go in 2-0 down wasn't what I expected," grumbled Moyes. "It was two counter-attack goals, we had good control of the game, passed the ball very well, kept the ball but didn't have the final pass or killer through ball that was needed. So it was disappointing, but I didn't think we deserved to go in 2-0 down at half time that's for sure."

What Moyes had singularly failed to understand, however, was that ceding United possession was part of Martinez's gameplan.

"I thought it was a very interesting game," said a beaming Martinez post-match. "We needed to be adaptable and I thought we were devastating on the counter attack and should have scored more. It was that sort of game where we were quite happy for them to have the ball and make sure that we knew how to use that to our advantage."

Martinez's gameplan hinged on the art of simplicity: sit back and wait for United to make mistakes. If there is one thing Manchester United have done this season, it is make mistakes. Adhering to the philosophy worked. Everton sat tight, with James McCarthy - restored to the team after being rested in the midweek defeat to Crystal Palace - and Gareth Barry forming a solid defensive midfield block.

Everton wilfully ceded possession. As soon as United's desperately laboured play broke down, Everton pounced like lions, flying fiercely into 50/50 challenges, pouring forward in numbers and forging more shooting opportunities than their opponents. Moyes made no changes at half time to rectify this, and had no answers to Martinez's Venus flytrap gameplan. Tactically, it was Old Everton Boss 0-1 New Everton Boss.

The future is bright for Everton under Martinez

Much has been made about the differences between Martinez and Moyes this season. The former Wigan boss has already topped Moyes' best points total at Everton in 11 years, and a glimpse into the difference in aura about these two men was once again revealed in the post-match press conference.

As has been the case for most of this season, the United boss was brief with the press, offering four minutes of his time. Perhaps understandably given a bad day at the office, he looked edgy, irritable and was curt with his responses. Martinez by contrast spoke positively, with enthusiasm and a clear purpose.

"We knew that since 1969 we had never done the double over United and I think that's when we won the league," said Martinez, showing an impressive grasp of Everton's history. "I think that tells you that this group of players are ready to develop something special. I think there is a mental side - if you can do the double over the current champions, [then] there is something special in the group. I always felt that we were developing into a very strong side and today we showed proof of that."

69 points after 35 games keeps Everton's Champions League dream alive. The Toffees are just one point behind Arsenal and six behind second-placed Chelsea. Regardless of whether or not Everton secure elite-level European football next season, however, this is clearly a team on the up.

"When I arrived at Everton I said straight away I was a very fortunate man to walk into a football club where everything is in place, where all the work that David did over 11 years is there," said Martinez, paying deserved deference to his predecessor's fine work.

"Previously I've been into football clubs that looked like a bomb exploded. I wanted to change many things but I didn't want to lose anything. At the same time we brought 10 players in, which is a big amount. The senior players were very open to trying to play in a different manner. And then we gave a massive role to the younger players," said Martinez, explaining how he took the club up a level.

"That's probably the big difference of this squad, that the younger players have got a big role in this team. If they make mistakes I'll take responsibility, it's not a problem. But I think we needed that unknown quantity from the young players, to see how far we could push the group."

His choice of footwear may raise eyebrows here and there, but Martinez is most certainly a manager on the up - and Everton are enjoying the ride.

Wayne Rooney put in a disappointing performance in Munich against European champions Bayern 11 days ago, in circumstances mitigated by a foot injury that required a pre-match injection. Rooney missed golden chances in that 3-1 European defeat, but in better shape today he failed to impress, again missing United's best chance late on as Tim Howard saved impressively.

Statistically Rooney has enjoyed a positive season, with 15 goals and 10 assists from 28 league appearances. However, the England star has failed to deliver repeatedly in big games for United this season, managing just one goal in games against the league's top five. In attacking-third play Rooney was wasteful here, completing just 14 of 24 passes, and while he has been touted as Manchester United's next captain (he was handed the armband at Goodison) Rooney did little to gee up or inspire a team seemingly wallowing in self-pity and low morale.

For Everton meanwhile, Seamus Coleman was once again a major player. Chris Smalling, who remains as suited to right back as Lionel Messi is to playing in goal, and Alex Buttner, who is yet to prove he meets the standard required in a top four Premier League side, struggled to cope with Coleman and Leighton Baines' terrifying speed and aggression in wide areas as they charged forward from deep to create danger.

Coleman bagged an assist and created more chances than any other player on the day in yet another fine performance. "Seamus Coleman is developing a real understanding of how to use his penetration," Martinez raved post-match, as Coleman's development into the Premier League's best right back continued.

Defeat was Manchester United's 10th in 22 games in 2014. It was also the first time Everton have done a league double over United since 1969/70 - the year Everton won the league, as Martinez gleefully pointed out. Everton, Manchester City and Liverpool have all now done the double over the Red Devils this season.

Moyes has repeatedly called for time, but now the moment has surely arrived for the Manchester United hierarchy to question whether time is running out for the Scot. This was a familiar script - some early possession, some inoffensive passing, little penetration, a goal conceded and then a towel all too readily thrown in from a United team that were previously famous for their formidable resilience and never-say-die spirit. Moyes' Everton team was known for its hard work and organisation, character and willingness to fight. Yet his United team have very little of any of these qualities. Watching Wayne Rooney and others shirk 50/50 challenges at Goodison Park was remarkable for its sheer frequency and Everton looked far hungrier throughout.

The travelling fans were muted and despondent, with some cries of defiance but not many (and notably no chants in support of Moyes, which have dried up since the early part of the season when his name was sung proudly). The team are a mess. The players look lost. Martinez stood on the touchline in brown brogues, cajoling and geeing up his players. Moyes sat down with an uncomfortable frown like a man awkwardly trying his best not to be noticed, while next to him Steve Round sat with a disgruntled stare, arms folded.

It is not unfair to say United are a team in total disarray at present and going nowhere fast. Moyes offered little explanation post-match, besides repeating that his team had played well. After reports broke on Sunday morning that even die-hard United fan Danny Welbeck may also now be considering his future, you wonder at what point it becomes less a case of Moyes needing time and more a case of time for a change.