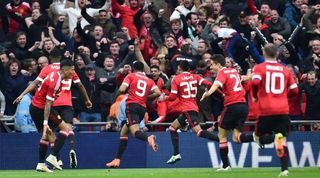 This week in five words

After picking up an easy three points at home against Crystal Palace midweek, United booked their place in the FA Cup final on Saturday.

Considering how many awful weeks Manchester United have had during the course of the season, this week has to go down as one of the best ones in Louis van Gaal's time at the club.

Manchester City won, meaning United didn't close the gap on them with their win against Palace on Wednesday. Arsenal's draw with Sunderland was good news, though, and means Van Gaal's side can close the gap to two points should they win their game in hand.

Ander Herrera, on his compatriot and friend David de Gea, who made a string of fine saves at Wembely – including Romelu Lukaku's penalty: "What can I say? I am not objective – he is the No.1 in the world.

"In England you know that, but in the rest of the world they think they have better goalkeepers. But I don’t think so. He has a special talent. When you are born with that quality and ability, you are so lucky. The rest of us humans, we have to work more."

Scenes outside Wembley as that man Martial popped up once again with another vital intervention, this time the winner that sends his side to the FA Cup final.

While the answer to this is obviously Martial, Marouane Fellaini certainly deserves a mention here.

Playing against his former team and getting booed by the blue half of Wembley whenever he went near the ball, the Belgian looked delighted to put United 1-0 up. He played well for the rest of the time he was on the field too, making some key clearances and winning the ball back well for his team.

But, clearly, Martial deserves this one, after scoring an injury-time winner to send United to the FA Cup final.

Having missed a good chance in the first half, Martial more than made up for it with his late goal, before diving in to the United end to celebrate. This will go down as one of his greatest moments at the club.

Having played all season, Juan Mata must be gutted to lose his place in the starting lineup to Jesse Lingard.

Finally, United have the chance of winning silverware, something the Spaniard must be desperate for after being spoilt at Chelsea, but he's losing his place in the team to an inferior player.

He needs to do something over the next few weeks to prove to Van Gaal that he deserves to play in the FA Cup final.