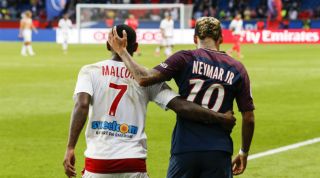 Manchester United and Tottenham have reportedly been tracking Bordeaux star Malcom for some time and it’s easy to see why. Over the past 12 months the young Brazilian star – Malcom will turn 21 in February – has developed into one of the most exciting talents in Ligue 1, a division known for producing a steady supply of top-class prospects for Premier League clubs.

It’s hardly surprising that a player that has an outside chance of claiming a spot in Brazil’s squad for the World Cup next summer is arguably the most sought-after player in France as the transfer window opens.

Bordeaux have a long and successful history of snapping up Brazilian talent, so Malcom was the latest in a line of players when he made the switch from Corinthians to the Gironde region in south-west France in January 2016. Although only 18, he had already made more than 70 first-team appearances for Corinthians and was marked out as a special talent with the potential to one day shine in a top European league.

Willy Sagnol was Bordeaux manager at the time and it was little surprise Malcom – who cost £3.8m, a fee that should turn out to be an absolute bargain – was used sparingly during his first six months at the club as he settled in. During the second half of the 2015-16 season, he made 12 appearances but that was enough to show glimpses of his talent.

It was last season that he truly became a key player for Bordeaux and began to display the ability that suggested he could go on to be a top-class performer for a bigger club abroad. Bordeaux finished sixth in the Ligue 1 standings and Malcom was one of their best players. From his right-wing position, he contributed seven goals and four assists, improving with the team during the second half of the season and producing some moments of outstanding individual skill.

As a result of how he performed in 2016-17, he went into the current campaign as a player to watch, and has been even better. Most Ligue 1 followers are aware he’s been one of the most exciting and effective attacking players in the division this season, making it increasingly unlikely that Bordeaux will be able to hang on to him because of the attention he’s attracted.

Malcom has outstanding dribbling skills and in that sense is a classic winger with the ability to beat his man in a number of ways. His trickery and invention in the final third make him difficult to stop as he can improvise and mix up his game, making him unpredictable in one-on-one situations and when faced with a wall of defenders.

He also has excellent long-range shooting ability, as he’s shown by scoring from outside the area on more than one occasion this season. That’s why a right-wing position has suited him: from such a starting point, he can cut in on his stronger left foot and hit the target from long range, as he did spectacularly in Ligue 1 matches against Saint-Etienne and Dijon.

The variety Malcom has in the final third was also illustrated when he went outside to score with his right foot against Nantes last October. On that occasion the defenders were expecting him to come inside, but he trusted himself on his weaker side and made the right decision as he found the net. Against Toulouse, he scored from the edge of the penalty area, showing he can be deadly if you give him time and space in central positions.

Malcom has operated almost exclusively as a winger at Bordeaux but some believe he will eventually develop into a No.10 playing behind one or two strikers. He has an eye for playing the right penultimate or final pass, and will become a lot more effective in this respect when he operates alongside better team-mates.

Malcom is not exactly excused from defensive duties at Bordeaux but it’s fair to say the defensive side of his game would need to improve if he were to move to the Premier League. His recovery runs can lack intensity and conviction. As a result, Bordeaux have sometimes been exposed on the right flank as he doesn’t always give right-back Youssouf Sabaly the necessary protection.

This is a frequent issue that attacking players moving from Ligue 1 to the Premier League have to deal with, however, so this would not be a stumbling block to a move. Dimitri Payet during his time at West Ham, for example, made light of his reputation as a defensively erratic player whose workrate was frequently questioned by adapting impressively to the demands of the Premier League.

Others, such as Sofiane Boufal at Southampton and Anthony Martial, have had problems, so it would essentially be down to Malcom and his own desire and ability to develop his game.

“Like all the top players in our league, Malcom is a bit different. He’s doesn’t play in the same position but he’s a bit like Seri at Nice, Fekir at Lyon or Lemar at Monaco: he’s one of those players that can make the difference for your team with his brilliant left foot.”

Malcom has represented Brazil at U20 and U23 level but has yet to play for the senior national team – although Selecao manager Tite has admitted he’s followed the youngster’s progress at Bordeaux over the past 12 months.

Bordeaux went into the winter break just one point above the relegation zone and would be in danger of going down – which would be a disaster for an ambitious and well-established club – if they sold their most talented performer.

Bordeaux president Stephane Martin has insisted the player is going nowhere, but Les Girondins would struggle to turn down a bid of €40m or more given that they operate with a smaller budget than Ligue 1 rivals PSG, Monaco, Lyon, Marseille and Lille.