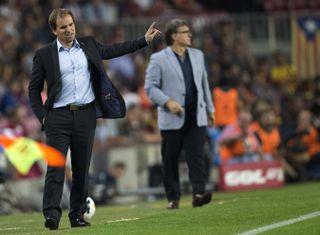 The international break means just one thing in Spain. Actually it means two. It means desperately contrived stories from the metropolitan media about Barcelona and Real Madrid, despite the fact that both clubs are pretty much empty of all playing personnel.

The other matter at hand is working out which club, if any, will be taking the opportunity afforded by the slowdown in activities to fire their boss, in the hope of a reversing a downwards trajectory.

The stoppage just gone saw Osasuna putting José Luis Mendilibar on the street for the local council to dump into the coaching landfill. However, there are still a number of other runners and riders who may well be contemplating a change at the top, if not now, after the next round of matches to come.

Many a La Liga manager received soothing words from the club president at the beginning of the season about being supported to the hilt, no matter what manner of poop doth fall from the skies during the season.

The goings-on at Celta Vigo were an example last season. Poor Paco Herrera was a boss who supposedly had a job for life at the beginning of the campaign, but was chopped halfway through by a panicking president.

There is a sense of a repeat performance at Almería. The southern club are bottom of the table and winless, but aren't playing too badly, having scored as many goals as Valencia.

The problem is that too many leads have been blown - often very late in the day - suggesting that there is a problem with the side’s mental and physical preparations. If the wet-eared Rodriguez can't mastermind a home win against second-bottom Rayo Vallecano in the first game back after the break, expect the already unhappy preseident to pull the plug.

La Real have won just the single league game in eight so far this season. As it was against an immensely flimsy Getafe on the first day of the campaign, it doesn’t really count, anyway. That record leaves the team stuck in 15th, just a point from the drop-zone and struggling to repeat the immense form displayed under Philippe Montanier last season.

The current boss is another untried novice who was part of Montanier’s coaching team last season. With two defeats from two already in the Champions League group and the European places not too far away, there is still time to turn things around in San Sebastian, with a change of manager for a figure with a bit more oomph and experience.

LLL Prediction - La Real may be cruel to the coach to be kind to the club.

So far, all the fancy former Barça B boss has delivered is promise rather than results. Galicians expected a mini version of the Catalan club, due to the background of Enrique and some of the players brought in, but so far Celta have failed to get going with the side only out of the relegation zone on goal difference.

What Enrique has very much against him is that the former footballer is a rather aloof figure - huge mirrored sunglasses on the training field, that sort of thing - who hasn't really been keen on building up relationships with the local press. Supporters have also been baffled by players being rotated, dropped and subbed.

While an immediate firing is not on the cards, due to the faith the president has in the appointment of Enrique, a new year expulsion would not be a wholly improbable idea if matters do not improve by the winter break.

LLL Prediction - Enrique will need to watch where he treads.