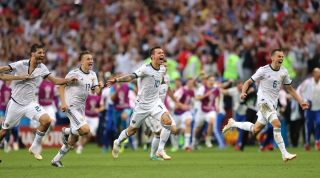 1. Hosts march on as Spain put to the sword

When Spain took the lead against Russia through a Sergei Ignashevich own goal in the 12th minute, it was presumed they would ease to a comfortable victory to book their place in the quarter-finals. Instead, Artem Dzyuba levelled the scores from the penalty spot before half-time as La Roja were continually frustrated in their attempts to break down the hosts' well-manned rearguard.

Spain didn't do enough as they searched for a winner in both regulation time and the additional 30 minutes, with Russia's defenders keeping their concentration throughout. The first four efforts in the penalty shoot-out were scored, but the Russians had the advantage when Koke's spot-kick was saved by Igor Akinfeev. Sergio Ramos and Denis Cheryshev then converted, before Akinfeev's stop to deny Iago Aspas sent Russia through and Spain home.

The second game of the day got off to a blistering start in Nizhny Novgorod. Denmark took the lead in the first minute, as Danijel Subasic was unable to keep out Mathias Jorgensen's strike after Croatia struggled to clear a Jonas Knudsen long throw. The Vatreni were back on level terms soon afer through Mario Mandzukic, but neither side was unable to land a decisive blow before the end of the 90 minutes.

Luka Modric spurned a golden opportunity to put Croatia in front with six minutes of extra time left to play, but his penalty was comfortably held by Kasper Schmeichel. There were more spot-kicks to come in the shoot-out, with Croatia triumphing after Christian Eriksen, Lasse Schone and Nicolai Jorgensen failed to score.

South Korea upset the odds when they co-hosted the tournament alongside Japan in 2002, reaching the semi-finals and only narrowly losing to Germany 1-0. Guus Hiddink's side beat Italy (after extra time) and Spain (on penalties) en route to the last four, despite pre-tournament predictions that they may struggle to advance from a group containing Portugal, Poland and the United States.

Russia were also written off before the competition began last month, with many of their own fans pessimistic about their chances. Remarkably, though, Stanislav Cherchesov's charges are now just two wins away from the World Cup final.

4. Ronaldo not ready to discuss future

Argentina and Portugal's eliminations from the World Cup on Saturday has led to much talk over the international futures of Lionel Messi and Cristiano Ronaldo. Messi hasn't yet commented on his situation following the Albiceleste's 4-3 loss to France, while Ronaldo says it's too early to speak about the topic following Portugal's 2-1 defeat by Uruguay.

"I reckon it is not the right time to talk about the future, but I am sure that our national team will continue to be one of the best in the world, with awesome players, a fantastic group, and young as well," the Real Madrid man said. "A group that has a big ambition to triumph and that is why I am happy about everything."

James Rodriguez's fitness has been one of the key talking points ahead of England's last-16 clash with Colombia, but the Three Lions have been boosted by the news that Dele Alli is fit to face Jose Pekerman's men on Tuesday.

"I was frustrated after the injury, but I’ve been doing a lot of work to make sure I’m back so I can make a contribution to the team,” the Tottenham midfielder said. “I felt like I could run it off [against Tunisia] and I told the manager and the physios I was OK. It’s been difficult watching the team play well because you always want to be out there and a part of it, helping them. So I’m looking forward to being a part of it again.”

Edinson Cavani was the match-winner as Uruguay edged out Portugal on Saturday evening, but the two-goal striker was unable to finish the match after sustaining a suspected hamstring injury in the 74th minute of the game. The PSG frontman now faces a race against time to be fit for Friday's quarter-final against France.

"We don't have a lot of time to recover," admitted manager Oscar Tabarez. "Right now, we are only worried but we don't know how serious the injury really is." Cavani, meanwhile, explained: "I just felt something at one point and couldn't recover... I hope [to be fit] and I'll do everything to make sure I can take to the field with my team-mates."