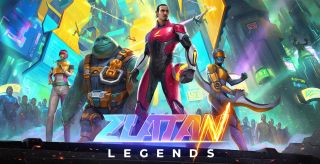 The big Swede has been thrust under the spotlight during the summer as he completes his return from injury.

The 35-year-old striker has been the subject of much interest from the MLS, alongside talk of a new short-term deal back with Manchester United.

Fair to say, he’s hot property. But despite his hectic schedule, he’s still found time to further his legacy and launch a new game called Legends.

It is a racing game, where Zlatan stars in as the main character, of course. The aim is to beat the other players, collecting as many points along the way as possible.

Following the release of the app, Zlatan said: “I was not interested in releasing another football game onto the market – it’s important that the game felt unique and was built from scratch.”

For what pace Zlatan lacks in real-life, he certainly makes up for in this game.