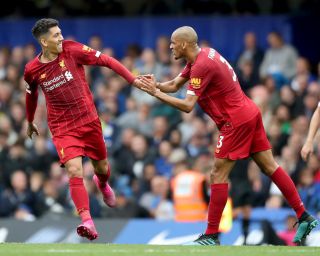 Premier League leaders Liverpool maintained their 100 per cent start to the season, while champions Manchester City returned to winning ways in emphatic fashion.

There were also surprise defeats for top-six hopefuls Tottenham and Manchester United, and another major setback for under-pressure Everton boss Marco Silva.

Here, the PA news agency picks out some of the main talking points from the latest round of top-flight fixtures.

Controversy never too VAR away

The introduction of VAR in the Premier League continues to make headlines on a weekly basis. A series of goals were disallowed over the course of the weekend following interventions from the technology, with Serge Aurier’s undoubtedly the most contentious. The right-back thought he had put Spurs on course for victory at Leicester by doubling their lead, but they were eventually beaten 2-1 after Son Heung-min was ruled to be millimetres offside in the build-up. The decision sparked debate – and plenty of outrage – with many questioning the accuracy of VAR in making offside calls, while others dismissed the criticism, arguing the technology is consistent and offside decisions are not subjective.

More misery for Lampard as Reds roll on

Another enthralling game of Premier League football. @ChelseaFC a tad unfortunate to lose, but even when they’re not at their scintillating best @LFC seem to a find a way to win…15 PL games on the bounce, to be precise.— Gary Lineker (@GaryLineker) September 22, 2019

Table-topping Liverpool bounced back from their midweek Champions League loss to Napoli to restore their five-point cushion over Manchester City and inflict more Stamford Bridge misery on Frank Lampard. Chelsea boss Lampard was proud of his side’s display but has now taken just two points from a possible nine on home turf following Sunday’s 2-1 defeat, having also suffered a European defeat to Valencia in midweek. Victory for Jurgen Klopp’s relentless pacesetters was their sixth in a row in the league this term and 15th in total. Currently, Chelsea fans appear content to be patient with Lampard and his young team, but serious questions will be asked if the former Derby manager fails to break his duck when Brighton visit west London next weekend.

Manchester United’s continued homesickness was compounded by an injury to Marcus Rashford. England striker Rashford limped off early in the second half during Sunday’s demoralising 2-0 loss at West Ham. With Romelu Lukaku and Alexis Sanchez allowed to leave in the summer, Anthony Martial still injured and youngster Mason Greenwood ill, United are extremely light of options in attack and required Jesse Lingard to fill in against the Hammers. Under-fire manager Ole Gunnar Solskjaer has now seen his side fail to win any of their last nine away trips in all competitions, leaving United 10 points adrift of leaders Liverpool after just six games.

After spending heavily in the summer, Everton’s unconvincing start to the campaign was exacerbated by possibly their worst result so far. The Toffees dominated possession against newly-promoted Sheffield United but were beaten 2-0 to suffer a third defeat in four top-flight matches, turning up the heat on Portuguese coach Silva. After a midweek Carabao Cup trip to Sheffield Wednesday, things will get no easier for Silva in the league as free-scoring Manchester City are due at Goodison Park next weekend.

Fantastic perfomance from everyone and the 3 points 🔵🔵 @ManCity So happy for my first hat-trick ⚽️⚽️⚽️ pic.twitter.com/nbgPyjXFYw— Bernardo Silva (@BernardoCSilva) September 21, 2019

Manchester City came in for criticism after slipping to a shock defeat at newly-promoted Norwich last weekend. Pep Guardiola’s side responded in emphatic fashion on Saturday by thrashing woeful Watford 8-0. City’s remarkable five goals in the opening 18 minutes is the fastest any side has gone 5-0 ahead in Premier League history. David Silva’s opener after 52 seconds was the quickest top-flight goal this term, while Sergio Aguero claimed his 100th Premier League goal at the Etihad Stadium and Bernardo Silva registered the first hat-trick of his career. Watford, in their second match since the return of manager Quique Sanchez Flores, suffered more humiliation at the hands of the champions after losing 6-0 in May’s FA Cup final.