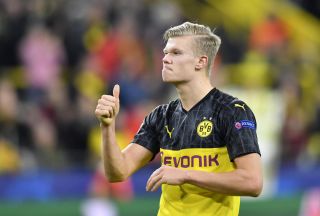 Haaland – the son of former Leeds, Manchester City and Nottingham Forest midfielder Alf-Inge – averaged a goal every 52.3 minutes at Salzburg, with 28 in 22 games.

Incredibly, he has averaged a goal every 39.9 minutes for Dortmund.

Haaland had scored eight in five Bundesliga appearances, including a debut 20-minute hat-trick in a 5-3 win at Augsburg, and one in a DFB-Pokal Cup tie before the Champions League win over PSG.

He is the first player in Dortmund’s history to score on his Bundesliga, German Cup and Champions League debuts.