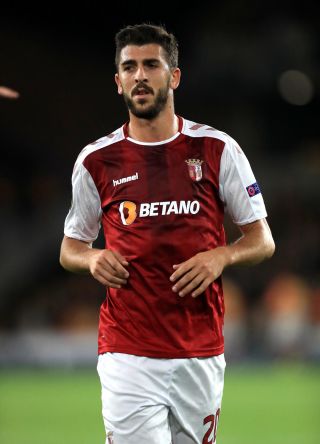 Rangers host Braga at Ibrox in the first leg of their Europa League last-32 clash.

Here, the PA news agency takes a look at the Portuguese outfit ahead of Thursday’s game.

Braga have been in Europe in 15 of the last 16 seasons and reached the 2011 Europa League final, losing to rivals Porto 1-0 in Dublin. They are unbeaten in 13 European matches, winning nine, and have won eight out of 10 this term. Their last away defeat in continental competition came in February 2018 when they went down 3-0 to Marseille in the first leg of their last-32 tie.

Braga’s record against Scottish opposition is mixed. Hearts were the first team from north of the border to make the journey to Estadio Municipal de Braga for a UEFA Cup showdown in 2004. The Jambos travelled to Portugal having claimed a 3-1 triumph with goals from Andy Webster, Paul Hartley and Patrick Kisnorbo in a game staged at Murrayfield rather than Tynecastle. Dutchman Mark De Vries then grabbed a second-leg double to hand Craig Levein’s side a 2-2 draw and progress to the group stages. But the Archbishops had better luck against Celtic in 2010 in their first ever Champions League clash as they dished out a 3-0 drubbing to Neil Lennon’s Hoops in Portugal. Gary Hooper and Efrain Juarez netted for the hosts in the Parkhead return but Paulo Cesar’s early opener had already but the tie beyond the Celts.

Striker Paulinho has scored 15 goals in 27 appearances in all competitions this season. He was in Portugal’s provisional squad for last year’s World Cup but did not make the final cut. Young forward Francisco Trincao, meanwhile, has agreed a £26million summer move to Barcelona. The Portugal Under-21 international made his debut in his country’s top flight in January last year and has this season contributed four goals from 19 run-outs.

Ruben Amorim was appointed boss two days before Christmas and only three months after returning to Braga to coach the club’s B team. Amorim is best known for his nine-year stint at Benfica, who he helped win three Portuguese league titles. He also made 14 appearances for Portugal, including run-outs at both the 2010 and 2014 World Cups.

Braga have embarked on a seriously impressive run of form since Amorim took charge. A sequence of six wins and a draw from his seven Primeira Liga games in charge so far have seen the club surge up to third place. Last weekend’s 1-0 win over Benfica was Braga’s first victory at the Stadium of Light for 65 years. And Amorim already has a trophy under his belt after guiding his team to a 1-0 triumph over Porto in last month’s Portuguese League Cup final.