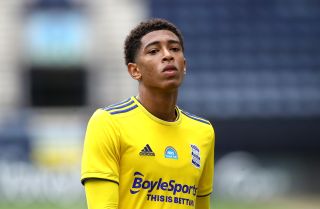 Jude Bellingham will make an instant impact for England Under-21s, according to boss Aidy Boothroyd.

The 17-year-old has been handed his first Under-21 call up after his £26million move to Borussia Dortmund from Birmingham in July.

The midfielder, who has skippered the Under-15s and Under-17s, could make his Young Lions debut in their Euro 2021 qualifier in Kosovo on Friday.

Boothroyd has previously stressed he will only select players when they are ready and insisted Bellingham can make the leap from the Under-17s.

He said: “He is a player who is capable of stepping up. He has been bought by one of the biggest clubs in Europe and it’ll be a different cultural experience for him.

“He’ll get a good education there, as he has had at Birmingham, and will absolutely thrive in the Bundesliga.

“With all the best players it’s their attitude which comes first. That dictates how high they go.

“He is a very grounded young man, a great guy, intelligent, understands where he’s at as a player and he is going to have a brilliant experience in Dortmund.”

England are joint top of Group Three with Austria, who they travel to on September 8, having played a game less.

Next year’s tournament in Hungary and Slovenia will be played in two parts, with the group stage in March and the knockout phase in May and June due to the coronavirus pandemic.

Boothroyd had no health concerns with travelling abroad over the next week and is just eager to resume their campaign after a 10-month break.

He said: “It’s very strange and different, going through all the protocols with coronavirus. It’s been a well-oiled operation getting all the players in and it was absolutely fantastic getting on the grass again.

“When you haven’t coached a team for 10 months it brings it all back.

“We have got a brilliant team looking after us, the logistics of getting to Kosovo, Austria and then home have all been very well thought through.

“It’s the same with the senior team. All we have to do is get there and get a couple of results.”