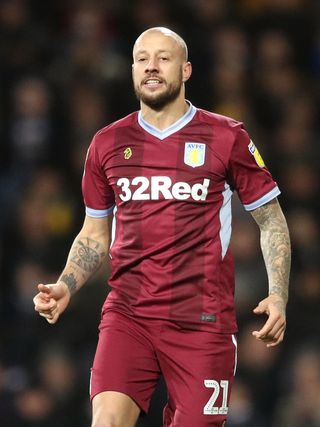 Former Scotland international Alan Hutton has announced his retirement from football at the age of 35.

Hutton played the majority of his professional career at Aston Villa, making 185 appearances before being released last year after Villa clinched promotion back to the Premier League.

The right-back also had spells with Rangers and Tottenham, while he won 50 Scotland caps between 2007 and 2016.

“I have come to the conclusion that I am going to retire from football,” Hutton told talkSPORT.

“Obviously, it has been a really difficult decision that I’ve had to make. I’ve taken my time and thought about it a lot.

“It’s been difficult, but I think for me moving forward it is the right thing.

“I could have played on, I had opportunities to play on, but nothing that really worked out for me and my family, if I am honest.

“It’s a sad moment for myself, but I think it is the right one overall.

“It has been such a big part of my life since I was six or seven. It has been a long journey, I’ve thoroughly enjoyed it.

“I’ve had some amazing moments, I’ve had some not so good moments, but it has given me everything I’ve got, and I am really thankful for that.”

Villa tweeted: “Wishing Alan Hutton all the best in his retirement. Congratulations on a fantastic career, Hutts!”

And the Scotland national team account tweeted: “Wishing all the best to Alan Hutton, who has today announced his retirement from football.

“Alan won 50 caps for Scotland, earning a place on the Roll of Honour. Enjoy retirement, Alan.”