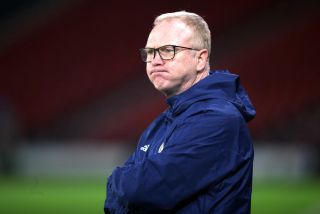 Alex McLeish admits he cannot wave a magic wand to summon up another winning Scotland team but is confident his “back-up” players can get their Euro 2020 campaign off to a positive start.

McLeish experienced nine call-offs ahead of the victories over Albania and Israel in November, having already seen the likes of Tom Cairney, Robert Snodgrass, Leigh Griffiths, Matt Ritchie and James McArthur drift out of the international picture, some for the time being at least.

Now Allan McGregor’s sudden international retirement – the day before he named his squad for the double header against Kazakhstan and San Marino – has left him scrambling to find a new number one on top of several injuries to outfield players.

McLeish could be without six of the players who started both games in November. As well as McGregor, McLeish has lost Steven Fletcher and Ryan Christie to injury and neither Ryan Fraser nor Callum Paterson will play in Kazakhstan because of concerns over the impact of the artificial surface at the Astana Arena.

Callum McGregor has also been missing for several weeks with a calf injury, although McLeish has been given “pretty positive” news form Celtic on his fitness.

Forward Steven Naismith has suffered a recurrence of the knee problem that saw him miss the Nations League finale, while Charlie Mulgrew is nursing a hamstring problem – although the Blackburn skipper is “very confident” he will make the trip.

🏴󠁧󠁢󠁳󠁣󠁴󠁿 | Congratulations to @sparkymcnulty on his first call-up to the @ScotlandNT ahead of their UEFA Euro 2020 Qualifiers away to Kazakhstan and San Marino. pic.twitter.com/nJqM4H8JDL— Hibernian FC (@HibernianFC) March 12, 2019

Sunderland’s on-loan Celtic winger Lewis Morgan and Hoops loan player Oli Burke have been recalled along with the fit-again Kenny McLean of Norwich.

The 27-man squad shares only 12 Scotland goals between them with five of them scored by James Forrest in November, while all three goalkeepers – Celtic’s Scott Bain, Millwall’s Jordan Archer and Jon McLaughlin of Sunderland – have only one cap each.

On the lack of experience up front, McLeish said: “It’s not ideal, I’d rather the guys were available for us. With every player of quality you lose from those two results we got in November, then obviously the quality diminishes a little bit.

“But we have every faith in the back-up squad that we have, players that can come in in their place.

“Don’t get me wrong, I can’t just make it magic like that if five or six of the players go missing from those two games, but we feel we have the cover available.”

LIVE | Alex McLeish speaks to the media after announcing his squad for our UEFA #EURO2020 qualifiers against Kazakhstan and San Marino.#NothingMattersMorehttps://t.co/Vpl2FTucdz— Scotland National Team (@ScotlandNT) March 12, 2019

On top of McGregor’s departure, the similarly experienced Craig Gordon has fallen behind Bain in the pecking order at Celtic and was missing through injury at the weekend.

McLeish was non-committal over his new number one and said: “People have to start somewhere. It’s not like right at the moment I am feeling concerned about it.

“The way I see it, it’s an opportunity for one of the goalkeepers to go and excel and show they can become an international goalkeeper on a regular basis, the way Craig Gordon and Allan McGregor have done in the past.”