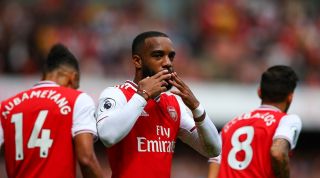 Lacazette is currently recovering from an ankle injury that has kept him out of action since mid-September.

He has built a profitable partnership with team-mate Pierre-Emerick Aubameyang on and off the pitch.

With Nicolas Pepe's arrival at the club, however, and Lacazette's current injury giving youngsters like Bukayo Saka a chance to shine, Lacazette may struggle to get back into the starting XI upon his return.

The French striker was voted Arsenal's player of the season last season having scored 19 goals and assisted 13 in all competitions.

But there were reports of Lacazette leaving the Gunners in the summer, with Barcelona and Atletico Madrid rumoured to be interested.

However, as per the Metro, agent Dmitry Cheltsov claims he also offered Lacazette to Russian outfit Zenit St Petersburg - and suggested the striker has a release clause.

"Their sporting director Javier Ribalta said to me: ‘Are you crazy? His release clause is €68m [£61m]'."

Cheltsov insisted they could lower the fee if they negotiated.

In the end, however, it's understood that Zenit opted to sign Barcelona's Malcolm for an initial £36m instead.