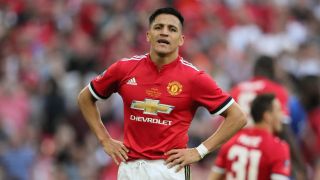 Alexis Sanchez finally looks set to join up with his Manchester United team-mates on their tour of the United States after hinting a visa issue denying him entry has been resolved.

Sanchez was unable to fly out to the USA with United when they initially left for their pre-season trip, with the club acknowledging a "personal administrative issue" prevented his travel.

It became apparent the problem related to not being granted a visa as a result of accepting a 16-month suspended jail sentence in Spain earlier in 2018 for tax fraud.

Manager Jose Mourinho said in a news conference on Thursday that Sanchez was "very sad" about the situation which was "not good for him or me", with the Portuguese coach suggesting United's pre-season has got off to a poor start.

But, Mourinho looks set to be handed a boost in the shape of Sanchez.

Jose Mourinho's wish for Alexis Sanchez to join Manchester United in the United States appears to have been granted.The Chile international has posted an Instagram story suggesting his visa problems are sorted.July 19, 2018

The Chile international posted on his official Instagram story a photo of himself and his personal trainer at United's Carrington training base, with the caption saying: "The last training in Manchester. Soon [USA]".

United play Liga MX side Club America in their first pre-season game in Glendale, Arizona on Friday, though that match is likely to come too soon for Sanchez.