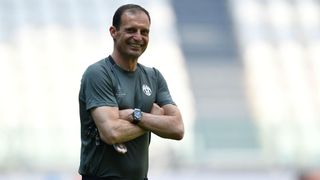 Massimiliano Allegri insists he is not worried by Juventus' poor record in major European finals ahead of facing Real Madrid in a Champions League showdown in Cardiff on Saturday.

Juve have won only two of their eight final appearances in the premier continental showpiece, losing their last four - most recently against Barcelona in 2015.

But Allegri feels not enough has been made of the achievement in reaching the final and does not want to worry about such negative thoughts.

"It's an important match and we must simply do what we've produced all season long," he told a news conference.

"Negativity is infectious. When I took over there was an air of negativity which was frightening and I can sense a touch of that now too when I hear people talking about the finals we've lost.

"There's only one Champions League like there's only one Super Bowl and what matters is being in the right place at the right time. I'm delighted to be in the final and I feel fortunate to be leading a team out in Cardiff on Saturday."

The Juve boss acknowledges, though, that his side are not favourites against Madrid, who have won the competition in two of the last three seasons.

"We must be relaxed in the build-up this week and prepare for the match without anxiety," he added.

"We're right to be optimistic, but I don't think it's fair to say – as I've been hearing recently – that Juventus are favourites.

"Real are in their third final in four seasons and are used to this stage of the competition, as are we with our second in the space of three years.

"It's a wonderful event and we deserve to be here. The lads have achieved this for everyone and we'll go there with greater belief in our ability than we had two years ago.

"We do, however, know we face Real and they're favourites. Juventus must once again become accustomed to being a fixture among Europe's top eight sides and we must avoid anxiety in the final as it only serves to sap away energy."