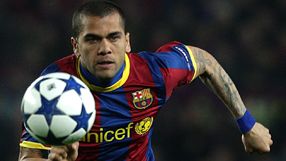 "Barcelona announces that they have reached an agreement with Dani Alves to extend his contractual relationship with the club for three more seasons until June 30, 2015," Barca said in a statement on their website.

The pacy 27-year-old Brazilian, who played at last year's World Cup finals in South Africa and is one of the most popular players with fans of the Catalan club, was linked in the media with a move to Premier League Manchester City.

Many of Barca's attacks on goal rely on Alves's high-energy playing style and dashing runs down the right flank and he has forged a highly effective partnership with Argentine World Player of the Year Lionel Messi.

Alves, who Barca said would sign his new contract on Wednesday, has made 141 appearances since joining from Sevilla at the end of the 2007/08 season, scoring 11 goals, including a brilliant strike against Getafe in La Liga at the weekend.

He has 12 assists in the league this season, as well as one in the Champions League and two in the King's Cup.