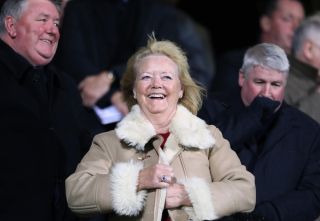 Hearts owner Ann Budge has vowed to take legal action should her club be relegated with eight games left.

The Scottish Professional Football League is discussing potential options should there be a lengthy suspension of action.

Hearts are four points adrift at the foot of the Ladbrokes Premiership.

They missed the chance to get off the bottom in a 1-0 defeat by St Mirren less than 48 hours before a shutdown was declared on Friday.

When asked if she would take legal action if her club were relegated as it stands, Budge told Sky Sports News: “Yes, I would have to, because I fundamentally disagree with it.

“Because there are so many options, it’s difficult for me to sit here and say we would do this and do that.

“But I am not of a view that it’s a reasonable thing to do. Nor could I see who would benefit.

“How does that help anybody in a situation where we are all confronting issues that nobody ever imagined we would have to confront?

“Who benefits from it? I just can’t get my head round that.

“I have already made my position known shall we say, in a non-confrontational manner I would like to say, but I have tried to put my arguments over to the SPFL board. I know they are in a difficult situation.”

Celtic manager Neil Lennon claims his team should be declared champions if the season is not completed but the PA news agency understands that at least one top-flight club will push for the campaign to be declared null and void in that scenario.

Budge’s preference is that the final eight matches are played.

“I would love to be able to finish the season but if we can’t then I think we have to be pragmatic about it and take a view on a premature ending,” she added.

“If the season were deemed to be ended then you have to go back to the rules, and the rules very, very clearly state that the competition comprises 38 games.

“Clearly, we all know that we have not played 38 games.

“So I don’t think it’s as simple as somebody can deem everything to be as it is and take it from there. I don’t think that’s reasonable.”