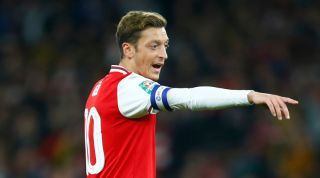 Arsenal's Özil has polarized fans, pundits and coaches during his time at the club with many questioning his consistency.

The German-Turkish playmaker currently sits on a deal believed to be worth £350,000 per-week - making him Arsenal's highest-paid player.

Arsenal have been reported to be looking for suitors for Özil over the last few transfer windows with the club keen to clear his wages from the bill.

Last summer, the number 10 was said to be the subject of a bid from MLS side DC United, but the move fell through.

According to 90min, Arsenal received a permanent offer for Özil in January but the move didn't happen due to Mikel Arteta's intervention.

Having been sidelined by former Gunners boss Unai Emery, the state of play looked bleak for Özil.

However, Arteta has been integrating the World Cup winner into his side and he looks to be a key cog in the Arsenal wheel once more.

Arteta's reluctance to see his main creative midfielder leave the club was accentuated by the lack of time to find a suitable replacement, as reported by the Mirror.

Arsenal appeared to survive a window that could've seen them lose a couple more important players.

Club captain and top goalscorer Pierre-Emerick Aubameyang was heavily linked to Barcelona but a bid didn't make it's way to the Emirates.

Former skipper Granit Xhaka was also reported to be a target for Bundesliga outfit Hertha Berlin.

However, Xhaka has appeared an integral part of Arteta's team and the Spanish head coach has been vocal about his support for the Swiss international.