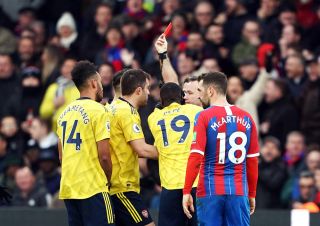 Arsenal captain Pierre-Emerick Aubameyang opened the scoring at Crystal Palace, but was later sent off as the hosts fought back to draw 1-1 at Selhurst Park.

New Gunners boss Mikel Arteta was on course for a third straight win when his skipper made the breakthrough in the first half, but a deflected effort by Jordan Ayew cancelled it out at the start of the second period.

When Aubameyang received a red card with 23 minutes left, the experienced Roy Hodgson would have fancied his chances of gaining three points against the youngest manager in the league and yet had to settle for a share of the spoils.

Arsenal’s difficulties this season were highlighted by the fact this was the first time Palace were facing the Gunners after Christmas in a top-flight match with the Eagles higher up in the table.

Hodgson was boosted by the return of Wilfried Zaha after he missed the defeat to Derby with a knock, but new loan signing Cenk Tosun was only named on the bench.

Captain Aubameyang was recalled by Arteta after sitting out the FA Cup win over Leeds and needed just 12 minutes to open the scoring at Selhurst Park.

Mesut Ozil’s licence to roam had already caused the hosts problems and he moved inside to combine with Alexandre Lacazette, who played in his fellow forward to curl into the bottom corner for his 16th goal of the season.

It was a breathtaking Arsenal move, which started with a brave through ball between the lines by David Luiz, and Palace could barely gain possession during the opening 30 minutes let alone lay a glove on the Gunners.

Zaha had cut a frustrated figure and this was highlighted when he shoved Nicolas Pepe into Lucas Torreira, with the visiting duo needing treatment. This at least allowed the winger the chance to change his boots.

The Eagles slowly settled into the London derby and Cheikhou Kouyate had their first effort of note in the 41st minute, which Bernd Leno unconvincingly parried.

Arteta introduced Matteo Guendouzi at half-time, with Torreira not returning, but Palace continued to win free kicks in dangerous positions after the break.

Eventually they made one count, when Jairo Riedewald found Max Meyer in space down the right. His cross was poor, but Kouyate was first to it and set up Ayew, who saw his strike take a big deflection off Luiz and loop over Leno.

The Ghanaian did not care with this 54th-minute effort his sixth goal of the season, although Arteta would have been frustrated with his players for switching off.

Arsenal’s problems heightened 10 minutes later when Aubameyang caught Meyer high on the ankle with a poor challenge by the touchline.

Referee Tierney showed a yellow card, but VAR had a look and after a two-and-a-half minute delay, the caution was upgraded to a sending off.

Aubameyang was distraught as he left the pitch and Meyer had to follow him down the tunnel after failing to recover from the tackle.

This allowed Hodgson to introduce Tosun for his debut, while Arteta withdrew Ozil for Brazilian forward Gabriel Martinelli.

James Tomkins almost produced a winner 12 minutes from time, but his header was cleared off the line by Sokratis Papastathopoulos and Arsenal then almost stole it.

Vicente Guaita came to the rescue though, when he superbly tipped Pepe’s shot on to the post and saved Lacazette’s follow-up in the 83rd minute as it finished all square.