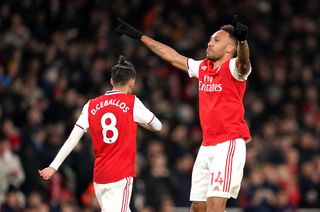 Aubameyang scored his 16th and 17th league goals of the season as he helped Arsenal defeat Everton 3-2 on Sunday.

The game saw Arsenal leapfrog the Toffees and go within four points of Manchester United in fifth place, which could now be enough to qualify for the Champions League.

The Gunners captain is key to their success of late under new boss Mikel Arteta - who knows what it's like to wear the armband.

But there are rumours rife that the Aubameyang could be set to leave the club this summer.

If Arsenal fail to agree a contract extension, it's understood they will look to cash in on their prized asset.

However, according to Le 10 Sport, Arsenal have had 'good contact' with the Gabonese goalscorer regarding him putting pen to paper.

It's reported that the club have been in talks with Aubameyang since last autumn and are encouraged by the noises from his camp.

The only hitch is that the 30-year-old striker is thought to be keeping an eye on the club's sporting situation as the business end of the season approaches.

It's believed that Aubameyang is keen to see whether Arsenal manage to qualify for the Champions League - a competition he feels he should be playing in.

The north London club can qualify via league position or through winning the Europa League.

Furthermore, Aubameyang is also said to want reassurances regarding Arsenal's level of ambition moving forward - including recruitment in the transfer market.

The report claims there could be further talks before the season's end, despite the conditional element to the player's demands.