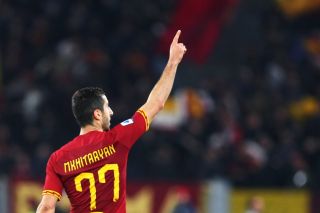 Henrikh Mkhitaryan’s Premier League career hasn’t gone to plan and he hopes to bring it to a close by joining Roma on a permanent deal.

The attacking midfielder, who came to prominence during a three-year spell at Borussia Dortmund, first came to England in 2016, as one of Jose Mourinho’s first signings for Manchester United.

Although he helped the club to lift the League Cup and Europa League in his debut season, even scoring in the final against Ajax, his impact at Old Trafford was limited.

He moved to Arsenal in January 2018 as part of the deal that saw Alexis Sanchez move the other way. Neither fared particularly well, and both are now on loan in Serie A.

While Sanchez has just one goal in 15 appearances for Inter Milan, Mkhitaryan has performed well despite injury problems.

In 13 league games for Roma, he has six goals and three assists, prompting the club to explore the possibility of making his move permanent.

According to the Daily Mail, Mkhitaryan has his heart set on joining the Giallorossi, having settled well in the Italian capital, where his first child was born earlier this month.

Although Arsenal are happy to let Mkhitaryan leave, they are hoping a bigger fee (£18million) than Roma are prepared to pay (£10million).

A compromise will have to be found if the transfer is to happen, but Arsenal have moved on in his absence, with new manager Mikel Arteta utilising young players from the club’s academy like Bukayo Saka, Reiss Nelson and Eddie Nketiah.

A parting of the ways would suit club and player, with discussions likely to continue over the coming months.

In defence of the match report: they may seem old fashioned, but they are essential to football's history