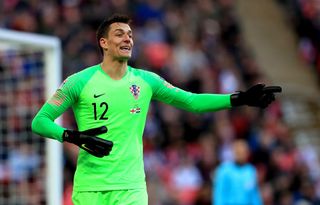 Aston Villa goalkeeper Lovre Kalinic has joined French Ligue One side Toulouse on loan until the end of the season.

Villa have allowed the Croatia international to leave the club after signing Pepe Reina on loan from Inter Milan last week.

Kalinic has only made eight appearances for Vila since signing a year ago for £5.4million from Belgian club Gent, with the last of those in mid-February.

“He’s a Croatian national goalkeeper, with his country qualifying for the Euros. He wants to get that opportunity to play in the summer.

“I’ve got Pepe and Orjan (Nyland) who’s been in fine form for us, so his chances are limited here.”