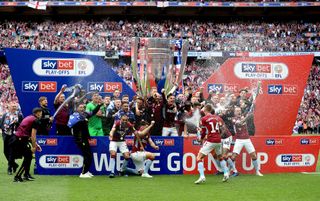 Prince William was among those celebrating Aston Villa’s return to the Premier League after beating Derby 2-1 in the Sky Bet Championship play-off final.

Villa have not been in the top tier since 2016 and last year suffered heartbreak in the play-off final against Fulham.

The Duke of Cambridge’s official Twitter account was among those to take to social media to express their feelings.

Congratulations Aston Villa on achieving promotion back to the Premier League! #UTVhttps://t.co/SO8p5ZIITu— Kensington Palace (@KensingtonRoyal) May 27, 2019

It said: “Congratulations Aston Villa on achieving promotion back to the Premier League!”

Anwar El Ghazi put Villa in the lead with his first-half strike before John McGinn  doubled their lead with 30 minutes left.

With seven minutes of injury time after Jack Marriott’s deflected effort gave Derby hope, they were ultimately unable to find the equaliser.

Villa right back Ahmed Elmohamady has been at the club for two years and said on instagram: “Job done, back to the big league.”

Derby fan Niall Horan added he was “proud” of his side’s performance.

Wasn’t to be today but what a season from the lads. Very proud of Frank and our @dcfcofficial lads. Congrats @AVFCOfficial. 🐏🐏🐏— Niall Horan (@NiallOfficial) May 27, 2019