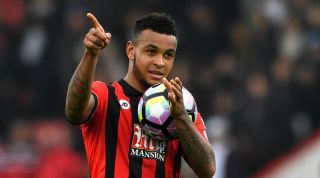 After missing out on Callum Wilson, who joined Newcastle earlier this week, Aston Villa are now focused on bringing his former Bournemouth teammate Josh King to Birmingham.

Villa struggled for goals last season, scoring just 41 in 38 Premier League games, and manager Dean Smith insisted new forwards would be brought in this summer. King, who has hit 48 goals in 161 Premier League appearances, is seen as a safe bet. It has been reported that a bid of around £20m will be enough to lure the former Manchester United youngster to Villa Park.

Villa stayed in the Premier League by the skin of their teeth last time around, surviving on the final day thanks to a 1-1 draw with West Ham United. The newly-promoted Premier League side were hoping Brazilian striker Wesley - a £20m arrival from Club Brugge last summer - would hit the ground running. Injuries and poor form led to Smith signing Mwana Samatta in January, however, though the Tanzanian also struggled.

King would add intelligent movement and pace to Villa's front line, and give talismanic playmaker Jack Grealish a quality striker to work with. Villa have also signed Nottingham Forest right-back Matty Cash this summer, as Smith looks to strengthen ahead of the new campaign.

Bournemouth have been picked apart this summer, after getting relegated at the end off last season following a five-year stay in the Premier League. The Cherries have already lost goalkeeper Adam Ramsdale, winger Ryan Frasier and defender Nathan Are, as well as Wilson. Manager Eddie Howe also walked away at the end of last season.